Setback to decongestion plan due to land acquisition. 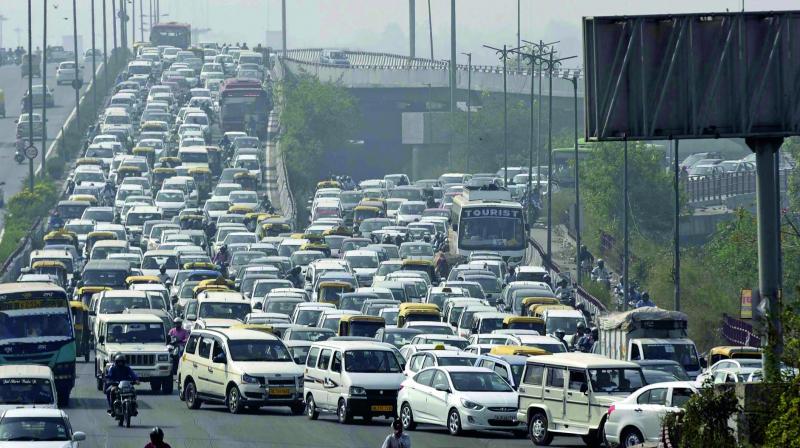 The project was planned to ease bottlenecks on major arterial stretches, including the Ring Road and the Outer Ring Road. (Photo: Asian Age)

New Delhi: In a major setback to the decongestion plan for the national capital, the third Ring Road project is likely to miss the 2020 deadline due to land acquisition issues. The project was planned to ease bottlenecks on major arterial stretches, including the Ring Road and the Outer Ring Road. Termed as the urban extension road 2 (UER 2), the project is being constructed to link the three major highways in Delhi.

In a recent meeting with the ministry of road transport and highways, the National Highways Authority of India (NHAI) proposed to take up the first phase of the 49-km project, while the second phase could be taken up by the Delhi government.

For the speedy completion of the project, it was decided in the meeting that both the phases should be taken up simultaneously. Officials said that in first phase, work will be completed between NH-1 and NH-8, while the second phase will connect NH-8 with NH-10 and NH-2. This will provide alternate route to traffic coming from these highways.

During the meeting it was also directed to the Delhi, UP and Haryana governments to resolve the land acquisition issues at the earliest. According to NHAI, the Outer Ring Road abruptly ends at Salimgarh Fort and leaves no bypass for traffic coming from Karnal and Sonepat and Ghaziabad and East Delhi to Faridabad via NH-2. Delhi PWD had earlier planned Kalindi Bypass as decongestion proposal for Ashram Chowk. “This would provide signal free corridor to traffic from Ring road,” the NHAI presentation said.

There are eight major stretches where land has not been acquired. This includes around 10-km stretch from Khanjawla to NH 10 near Mundka, two-kilometre stretch from Najafgarh to Dichaon Kalan village in Outer Delhi.