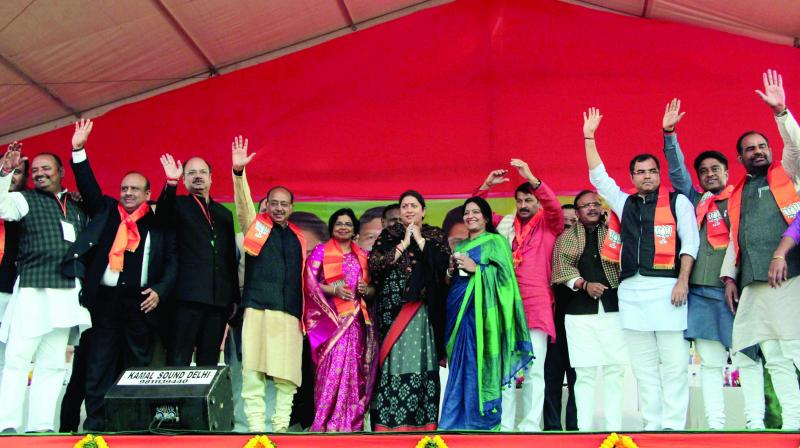 New Delhi: The Delhi BJP on Sunday hit out at the Arvind Kejriwal-led Delhi government at the “Hunkar Rally” for its failure to provide security to women in the national capital.

The rally was organised by the women cell of the Delhi BJP at Ramlila Ground on the sixth anniversary of the ‘Nirbhaya’ gangrape case.

The ‘Nirbhaya’ gangrape case that happened in December 16, 2012 triggered outrage and massive protests across the country. A 23-year-old paramedical student was gang-raped in a moving bus in Delhi and later died in a hospital. She subsequently came to be known as ‘Nirbhaya,’ the fearless.

Addressing the rally, Union textiles minister Smriti Irani said under the leadership of Prime Minister Narendra Modi, the BJP will make “lotus bloom” and the party will come to power again in the 2019 Lok Sabha elections. She asked party's women workers to reach out to people at booth-level with the message of the Modi government's holistic development and women power seeking their support in the general election.

Bharatiya Janata Party MP Meenakshi Lekhi listed the Modi government's schemes for women, saying that the BJP dispensation has given respect to women by their inclusion in its various schemes.

Meanwhile, at another event, mother of ‘Nirbhaya’, Asha Devi on Sunday urged the society and the government to come forward and work for women's safety. “Every morning when I get up, I am determined that today things will change. But daughters are still becoming the victims of heinous crimes. To stop all this, there is a need of a strong law. For this, the society and government should come together,” she said at an event here.

The programme was organised by Nirbhaya Jyoti Trust. BJP MP Udit Raj, who was also present at the event, said the patriarchal mindset prevailing in the country needed to be changed and that crime against women was a product of the present social and cultural system. Congress leader Sharmistha Mukherjee said merely making laws was not enough. “Their implementation and making people aware about the laws are equally important,” she said.