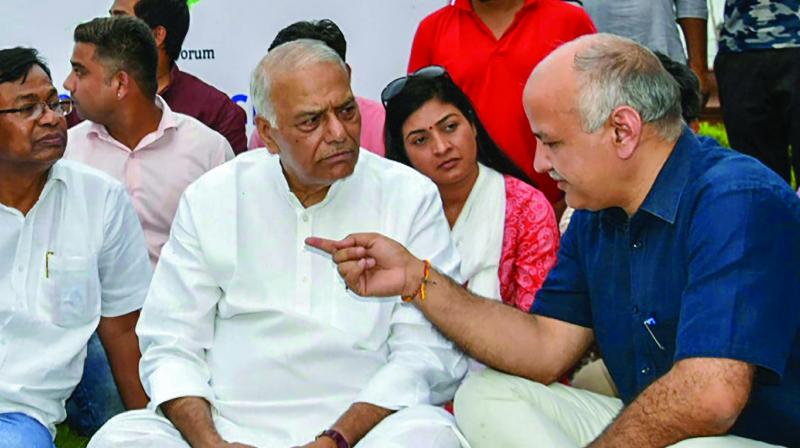 Deputy chief minister Manish Sisodia and Rashtra Manch convenor Yashwant Sinha during a protest outside the Rashtrapati Bhavan on Thursday against against the Karnataka governor’s decision and alleged that the unconstitutional move amounted to murder of democracy. (Photo: PTI)

New Delhi: Delhi finance minister Manish Sisodia, along with the finance ministers of Kerala, West Bengal, Andhra Pradesh, Punjab and the chief minister of Puducherry, met President Ram Nath Kovind in New Delhi on Thursday and submitted a memorandum urging amendments to the terms of reference (ToR) of the 15th Finance Commission.

The ministers said that the ToR would destroy the financial autonomy of the states. These states had earlier protested that they would lose out because of the commission’s decision to use the 2011 population census instead of 1971 as a basis for devolution of taxes from the Central government to the states, as they had successfully controlled their population.

Jointly addressing the media on Thursday after meeting the President, Kerala finance minister Thomas Issac said that they had requested Mr Kovind to amend the ToR by taking precedents from the past.

“Shifting of population base year from 1971 to 2011 violates the resolutions of the Parliament... We want 1971 as the base year for population calculation,” Mr Issac said.

When asked whether the President promised any change, Mr Issac told a news agency: “The President did not promise anything. But he will definitely look into it.”

Delhi finance minister Manish Sisodia alleged that the ToR was made with the thought of “How to overshadow states” and “How to control the financial autonomy of states”.

He also said that many aspects of the ToR “destabilise the well-settled federal arrangement” of India. The finance ministers of the southern states of Kerala, Karnataka and Andhra Pradesh and Puducherry chief minister V. Narayanasamy had met on 10 April and decided to submit a joint memorandum to the President.