ASI to take up repair work of Mishra Yantra

The markings have faded gradually and no proper restoration work has been carried out in the last 20 years. 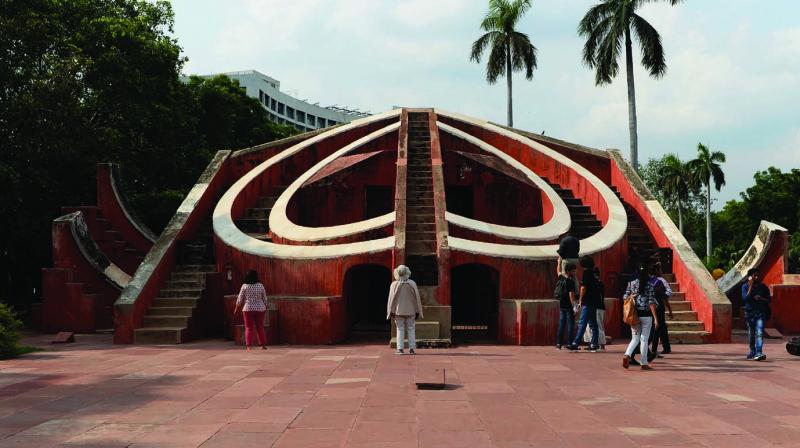 Visitors look at a structure at Jantar Mantar in New Delhi on Tuesday. (Photo: AFP)

New Delhi: The Archaeological Survey of India (ASI) will soon take up the long-delayed task of repairing “Mishra Yantra”, one of the four distinct astronomical instruments of Jantar Mantar that was used to predict noon time in different cities.

The structure, built in the 18th century, has seen deterioration over the years.

The markings have faded gradually and no proper restoration work has been carried out in the last 20 years.

The ASI has now invited bids for supplying the items for the long-delayed conservation work, which is likely to begin in two to three months’ time.

The Mishra Yantra, as its name indicates, is formed by the combination of five instruments.

It was constructed to predict noon times not just in Delhi but for other cities as well and measures the longest and shortest day of the year using its south-western pillars.

“The markings, which were used to predict time, have faded and continue to do so. If not repaired now, they will be completely erased and there will be no indication that the markings ever existed. The plaster has chipped off at places; some of the steps are broken. So, the repair work would restore the instrument to its original shape and functions,” said a senior official of the ASI.

The official said that while the other instruments — Samrat Yantra, Jaya Yantra, Rama Yantra — have seen on and off restoration work, no such work has been carried out for Mishra Yantra in the last several years. In fact, the last time the whole of Jantar Mantar was restor-ed was in 1982, when Delhi was hosting the Asiad Games, the senior official said.

While the observatory was set up by Maharaja Sawai Jai Singh, the Mishra Yantra was built by his son Madho Singh.

The tender to supply items for the conservation work was thrown open on July 11 and the estimated cost of the work is `9,87,673, as per the bidding document.

“The work is likely to start soon once the tender procedure is done and once the monsoon is over,” the senior official of the ASI added.