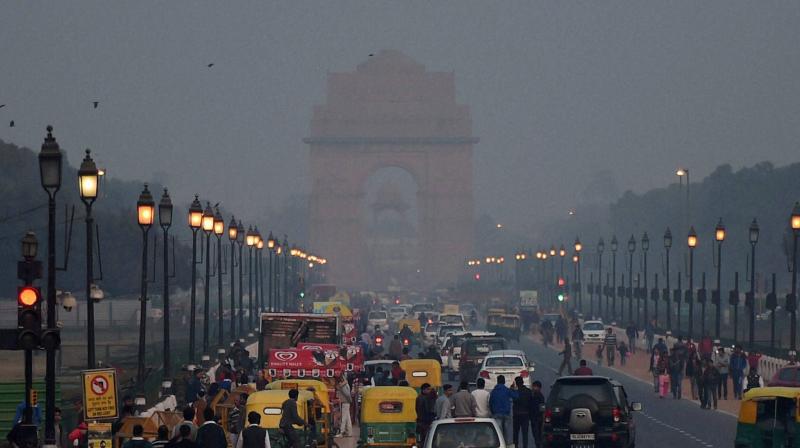 Further deterioration of air quality is forecast in the coming days with PM10 to reach 330 and PM2.5 to 151. (Photo: PTI/Representational)

NEW DELHI: Delhi’s air quality slipped to “very poor” category for the first time this season with several areas in the city nearing the levels of severe pollution.

The overall average Air Quality Index (AQI) of Delhi was recorded at 313, according to Central Pollution Control Board (CPCB), even as the environment minister released the latest satellite images from Nasa showing burning of crop residue in Punjab and Haryana and blamed the practice for pollution in the city.

The PM10 level (presence of particles with diameter less than 10 micrometres) in Delhi stood at 287 and the PM2.5 level was recorded at 131, according to the data.
Further deterioration of air quality is forecast in the coming days with PM10 to reach 330 and PM2.5 to 151.

An official with the CPCB said a number of factors are responsible for deteriorating air quality, including vehicular pollution, construction activities, and meteorological factors.

In meteorological factors, the main reason is the drop and change of wind speed which is now flowing from the stubble burning areas, another official said.

The deterioration of air quality comes days after the implementation of an emergency plan to combat pollution.

The GRAP, notified by the ministry of environment, forest and climate change in 2012, prescribes a set of measures to curb pollution based on the CPCB daily Air Quality Index.

The emergency plan gets implemented if “very poor” or “severe” pollution levels are recorded for 48 hours, but given the extent of winter pollution in the city, the plan has been implemented, the official said.

Meanwhile, environment minister Imran Hussain, who released the latest satellite images, said it was high time that crop residue burning in fields must be immediately halted.

If this was not done immediately, a serious health hazard awaits entire north India, he said.

“It is beyond any reasonable understanding as to why this menace is being ignored despite a well-known fact that the consequences will be disastrous in the coming days,” said the environment minister.