The BJP on Monday continued its counter-protest against Mr Kejriwal’s stir. 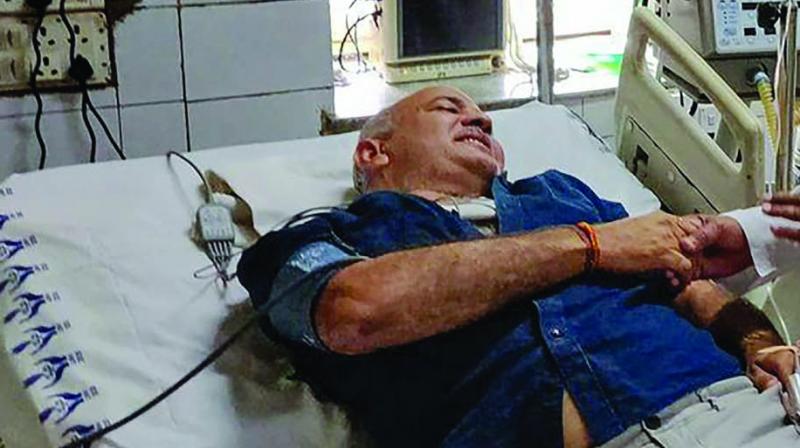 But Rahul Gandhi hit out at Mr Kejriwal and the BJP for their protests leading to a stalemate in the city while accusing.

New Delhi: Delhi deputy chief minister Manish Sisodia, who has been on hungerstrike since June 13 at the lieutenant-governor’s office at the Raj Niwas, was on Monday shifted to the LNJP Hospital after his health deteriorated.

CM Arvibd Kejriwal continued his protest at Raj Niwas for the eighth day on Monday along with development minister Gopal Rai.

“Manish Sisodia’s ketone level reaches 7.4. Yesterday it was 6.4. ideally it should be zero. 2+ level is considered to be danger zone. Team of doctors reaching LG house to see him (sic),” AAP spokesperson Saurabh Bharadwaj said in a tweet.

Health minister Satyendar Jain, who had been on indefinite fast since June 12, was on Sunday night hospitalised after his condition deteriorated. He was taken to the LNJP Hospital, where his condition was stable, doctors said.

The protest had evoked sympathy for Mr Kejriwal from the chief ministers of Kerala, West Bengal, Andhra Pradesh and Karnataka as well as leaders of the CPI, CPI(M), Jharkhand Mukti Morcha, RJD and the Samajwadi Party.

SP leader and MP Ram Gopal Yadav, who went to meet Mr Jain and Mr Sisodia in hospital on Monday, said it was “unfortunate” that a government working for the welfare of Delhi was obstructed by the lieutenant-governor.

“In democratic history, it is unheard of that IAS officers go on a strike. It is my appeal to the Prime Minister and the Lieutenant Governor that they talk about this issue,” he said.

In a setback to the Bharatiya Janta Party, the Shiv Sena, which along with the BJP rules Maharashtra, came out in support of Mr Kejriwal, a day after the Delhi Chief Minister spoke to party chief Uddhav Thackeray.

But Rahul Gandhi hit out at Mr Kejriwal and the BJP for their protests leading to a stalemate in the city while accusing Prime Minister Narendra Modi of ignoring the crisis.

“Delhi CM, sitting in Dharna at LG office. BJP sitting in Dharna at CM residence. Delhi bureaucrats addressing press conferences. PM turns a blind eye to the anarchy; rather nudges chaos and disorder. “People of Delhi are the victims, as this drama plays out,” he said in a series of tweets.

The BJP on Monday continued its counter-protest against Mr Kejriwal’s stir.