Metros   Delhi  19 Jun 2018  ‘Dharnas are held outside, not in someone’s residence’
Metros, Delhi

‘Dharnas are held outside, not in someone’s residence’ 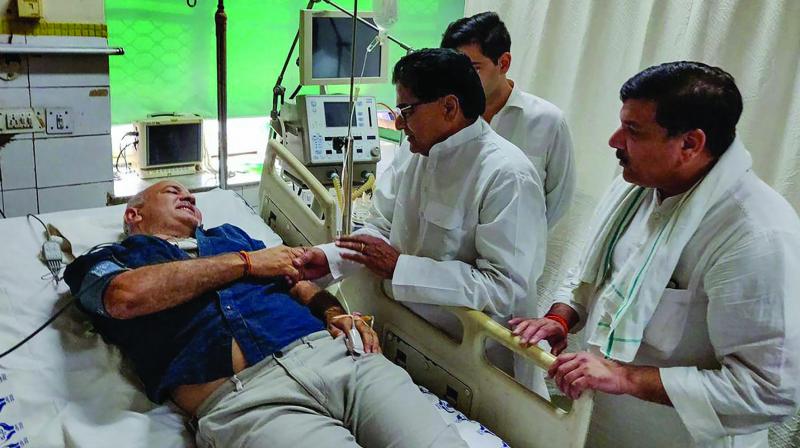 New Delhi: The Delhi high court on Monday virtually disapproved of the sit-in led by chief minister Arvind Kejriwal at the lieutenant-governor’s office and asked the AAP government who had authorised such a protest. The court did not issue any interim directions, but observed that strikes or dharnas are held outside and not inside someone’s workplace or residence. The observation by a bench of Justices A.K. Chawla and Navin Chawla came while hearing two petitions, one against Mr Kejriwal’s protest and another against the alleged strike by IAS officers of the Delhi administration.

After hearing arguments, the court listed the matter for next hearing on June 22. Mr Kejriwal and his ministers have been staging a sit-in at the L-G’s office since June 11 evening to press for their demands, including a direction to IAS officers to end their strike and action against those who have struck work.

“Who authorised the strike/dharna? You are sitting inside the L-G’s office. If it’s a strike, it has to be outside the office. You cannot hold a strike inside someone’s office or residence,” said the court.

Responding to the query by the bench, senior advocate Sudhir Na-ndrajog, who appeared for the Delhi government, said Mr Kejriwal and his Cabinet collea-gues took the decision to protest in their individual capacity and they were empowered to do so under Constitution.

Mr Nandrajog also told the court that the only direction that can be issued by the bench in these matters was to the IAS officers to attend routine departmental meetings held by the ministers. “An associat-ion representing the bureaucrats had admitted at a press conference on Sunday that they were not attending routine meetings,” he added.

During the arguments, the Central government told the court that no IAS officers were on strike and urged the bench to direct Mr Kejriwal and others to vacate lieutenant-governor Anil Baijal’s office.

The court asked petitioner advocate Umesh Gupta, who moved a plea against the alleged strike by the bureaucrats, to make an association representing IAS officers as a party in the matter. Umesh Gupta, in his plea, has sought a direction to the LG to ensure that the alleged informal strike by IAS officers of Delhi is called off and they perform their duties as public servants.

Another lawyer, Hari Nath Ram, has filed a petition to declare the sit-in by Mr Kejriwal and others — Deputy Chief Minister Manish Sisodia and Health Minister Satyender Jain — unconstitutional and illegal.