The government has made arrangements for Kashmiri Pandits to visit the state. 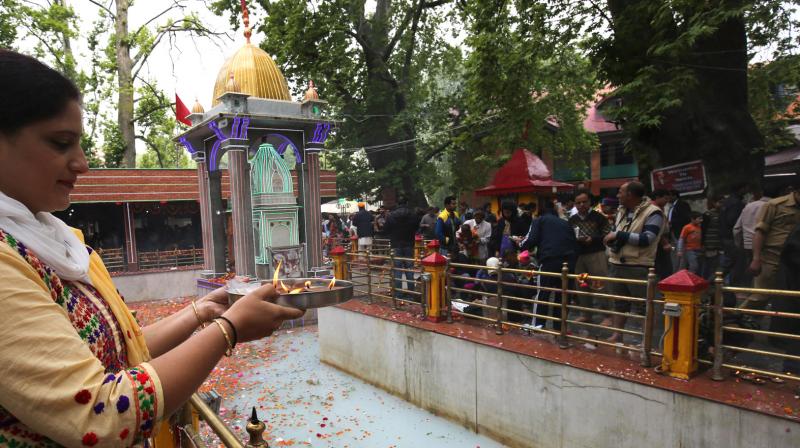 A file photo of Kheer Bhawani temple at Tulla Mulla near Srinagar.

New Delhi: It has been 28 years since Krishna Kaw, who is in her mid 70s, left her ancestral home in Jammu and Kashmir (J&K) during the onset of militancy in the Valley.

For the first time since January 1990, she will be visiting her homeland with scores of other displaced Kashmiri Pandits.

In a first such initiative, the J&K government has made special arrangements for the displaced Kashmiri Pandits to visit the city on the occasion of “Zestha Ashtami”.

The state government has provided transportation facilities in  New Delhi and Jammu to ferry pilgrims to and fro.

Speaking about the Valley, Ms Kaw called it a step towards “returning to the Valley.” On Monday, a congregation of displaced Kashmiri Pandits left New Delhi for the Mata Kheer Bhawani Tullamulla temple in Srinagar. All the expenses will be borne by the J&K government.

“We are going back in search of our lost homes. The temple is one of the most essential centres of our faith in the Valley. Even the Muslims revere this temple. Former chief minister Mufti Mohammad Sayeed was a frequent visitor to this temple. He took a keen interest in the development of the temple,” said Satish Mahaldar, the coordinator of the “yatra”.

Highlighting the concept of Kashmiriyat, he talked about how the festival of “Zestha Ashtami” was a symbol of their forgotten brotherhood.

“Kashmiriyat is all about shared land, food, and culture, which each Kashmiri practiced and embodied in their lives. We are going back to meet our brothers and sisters, who have faced immense tragedy because of terrorism,” he added.

Calling Kashmir his “home”, Dr Rajender Tikkoo, president, Kashmir Education, Culture and Science Society, said: “Communal harmony is something which is imbibed within our culture. I never felt that I didn’t belong to that land. It is my home.”

He added, “We need to understand that a collective effort is needed to bridge the gap between the two communities.”