The probe in the case has been taken over by the special cell, the police added. 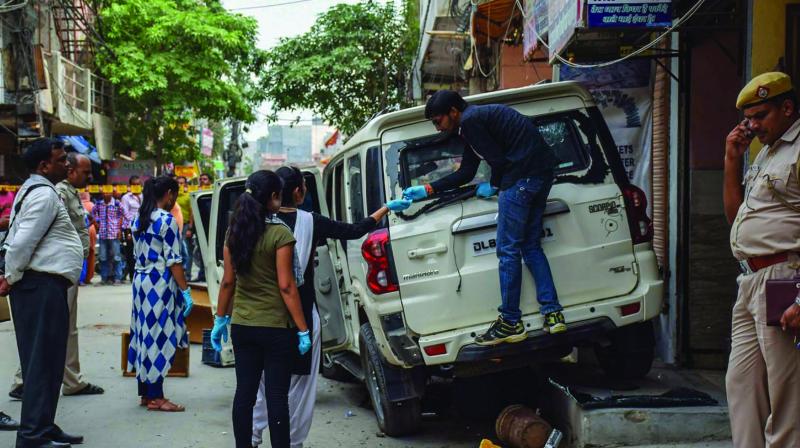 Police and forensic experts collect samples from the spot where criminal gangs opened fire at each other New Delhi on Monday. (Photo: PTI)

New Delhi: Gunshots rang out in North Delhi’s Burari area on Monday as members of a criminal gang opened fire at a group of men, suspected to be the members of a rival gang, killing four persons, including a woman passerby, the police said.

However, a motorcycle-borne man, identfied as Raj Kumar, was also killed after being hit by a speeding vehicle during the time of the incident, the police said.

Five persons were injured after suspected members of the Gogi gang, believed to be involved in cases of murder in the city, opened fire at four men coming out of a gym.

The police said around eight to nine rounds were fired by the Gogi gang members for around five minutes.

It is suspected that Jitender Gogi, kingpin of the Gogi gang, carrying a cash reward of `4 lakh on his head, was also inside the car, along with his gang members, said the police.

The probe in the case has been taken over by the special cell, the police added.

According to a senior police officer, the fight started when four residents of Tajpur village, who were boarding a Scorpio vehicle after coming out of a gym, were hit by a Fortuner, allegedly being driven by members of the Gogi gang from the backside.

Mukul was shot dead and it is suspected that he received three-four bullet injuries. Himanshu, who was also running to escape from the indiscriminate firing, sustained a bullet injury in his thigh.

Jitender and Surender, who were in the car, were found in an injured condition in the lane behind the place of the incident. A motorcycle rider was hit by the speeding Scorpio and died in the accident. Later, the Fortuner car, in which the Gogi gang members had arrived, was found outside the Max Hospital, Shalimar Bagh, with a man’s body inside.

It is suspected that the man is Sanjeet, a member of the Gogi gang, though yhe police is yet to confirm his identity. The man had one bullet injury in his leg, suspected to have been inflicted by one of his gang members during the attack. He died due to excessive bleeding.

A 37-year-old woman, identified as Sangeeta, who happened to be passing by, was also killed, the police said.

The injured were identified as Himanshu, Jitender and Surender and two passersby Vashisht and Sachin.

Surender and Jitender are currently undergoing treatment at the Max Hospital, Shalimar Bagh, while Himanshu is admitted to the Sant Parmanand Hospital. The two injured passersby are in the LNJP Hospital, police said.

The police has not completely ruled out the gang rivalry angle and are also probing whether the incident had anything to do with the rivalry between the Gogi and Tillu gangs that had begun in 2010 during the Delhi University elections.