The NDRF used sniffer dogs, sensors and cameras to check if there are people trapped in the debris. 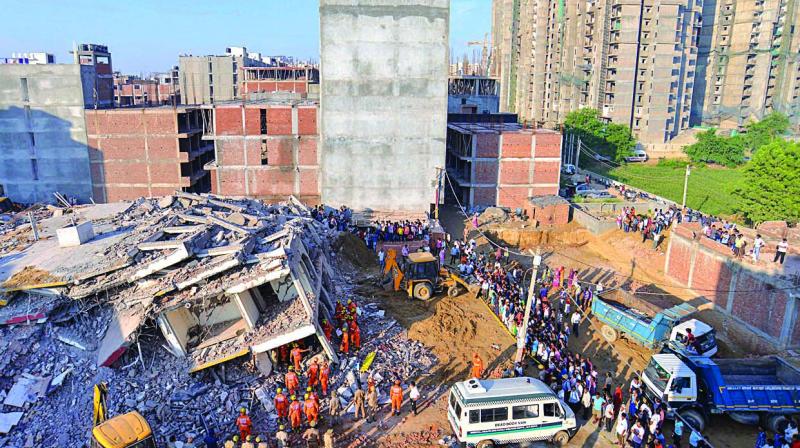 Rescue work being carried out at the site of a collapsed building at Shah Beri village in Greater Noida on Wednesday. (Photo: PTI)

Lucknow: Four people were killed in a building collapse in Greater Noida late on Tuesday night. Three persons were found dead after the collapse and the fourth body was taken out of the debris on Wednesday evening.

According to reports, a six-storey building collapsed and fell on another building, maximising the tragedy. Poor construction material being used in the construction is said to be the cause of the collapse.

Eighteen families lived in the buildings in the Shah Beri village and the construction is now said to be illegal. The National Disaster Response Force, the police and the fire brigade began rescue operations later on Tuesday night.

Reports said that while 400 NDRF personnel were involved in the rescue operations, more than 400 police personnel were deployed in the area to control the crowd. The agitated locals said that the police took more than an hour to reach the spot after the collapse of buildings was reported.

Officials said that it would take time — possibly another ten hours — to clear all the debris. Local people said that several people were still trapped under the debris.

Meanwhile, three people, including Gauri Shankar, the man who owned the under-construction site, have been arrested and a case has been registered against 18 persons. A magisterial probe has also been initiated in the matter.

Union minister Mahesh Sharma also reached the site of the collapse on Tuesday night. Director general, NDRF, Sanjay Kumar, who rushed to the spot, said that they were exercising caution while operating the machines so that those trapped under the debris were not harmed. This was leading to the delay, he said.

An FIR under IPC sections 304 (culpable homicide not amounting to murder), 288 (negligent conduct with respect to pulling down or repairing buildings), 388 (extortion by threat of accusation of an offence punishable with death or imprisonment for life) and 427 (mischief causing damage to the amount of Rs 50) were lodged at the Bisrakh police station against 18 persons in connection with the incident, the zonal IG said.