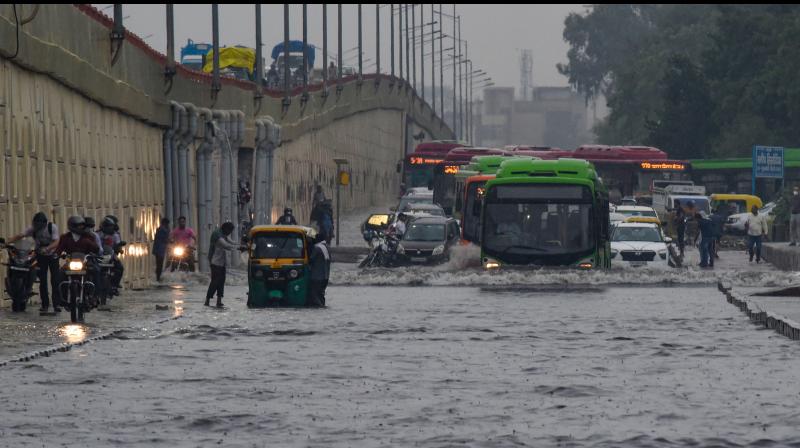 Kuldeep Srivastava, the head of the regional forecasting centre of the India Meteorological Department, said Delhi recorded moderate rains till 11:30 am. More rains are very likely as the day progresses.

Earlier at 10.05 am, the India Meteorological Department issued an alert for heavy rains in the national capital.

The downpour may lead to "major traffic disruption" and there is an "increased chance" of road accidents, it warned.

The rains flooded many streets, turning them into small rivers, as traffic came to a virtual standstill at key stretches.

Many parts of the city were completely inundated after just a few hours of rain.

Pictures and videos of vehicles stuck on waterlogged roads and people wading through waist-deep water were widely shared on social media.

Civic bodies reported incidents of uprooting of trees in a few areas due to the rains.

Several vehicles were damaged after a boundary wall of a school in the Saket area collapsed due to the rains, civic officials said.

Srivastava said the axis of monsoon will remain close to the national capital till Thursday. Therefore, more rains are likely.

The downpour is expected to reduce the rain deficiency in the capital.

The Safdarjung Observatory has recorded 147.4 mm rainfall against the normal of 165.2 mm in August so far, a deficiency of 11 per cent.

Overall, it has recorded 466 mm rainfall, six per cent more than the normal of 441.3 mm since June 1 when the monsoon season starts.