She claimed that her daughter was compelled by her colleague Vandana to go to the residence of CM in Kaushambi after which this happened. 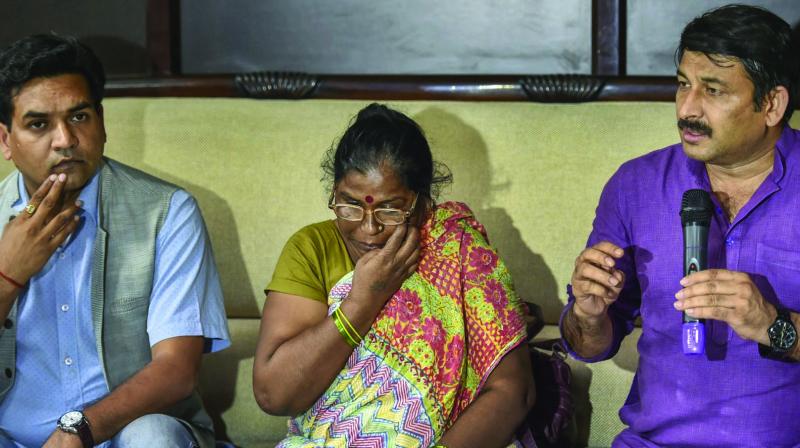 New Delhi: Delhi BJP president Manoj Tiwari on Tuesday claimed that National Commission for Scheduled Castes has ordered a CBI inquiry into the death of AAP worker Santosh Koli on the complaint of her mother Kalawati Koli.

Mr Tiwari said that Koli was a brave lady who always worked to solve the problems of common man but even after five years of her death the guilty persons have not been punished. “The National Commission for SC has given orders for CBI inquiry on the complaint of Kalawati Koli. BJP stands by the mother of Santosh Koli to ensure punishment to the guilty persons,” Mr Tiwari added.

Mr Tiwari accused Aam Aadmi Party of not cooperating in the judicial inquiry into the death of its prominent worker and said that he will request to the CBI to complete the inquiry within 60 days.

The mother of Santosh Koli, Ms Kalawati Koli said that her daughter’s death was not an accident but a political murder and the AAP got political mileage from it. She claimed that her daughter was compelled by her colleague Vandana to go to the residence of chief minister in Kaushambi after which this happened.

Rebel AAP leader Kapil Mishra expressed his surprise that the person driving the bike was safe but the bike was fully burnt and Santosh Koli also died of burn injury and this indicates about the deep conspiracy by influential persons.