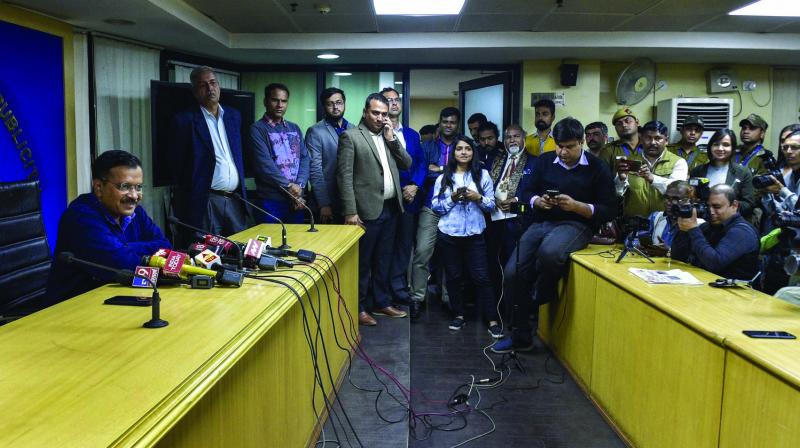 New Delhi: Delhi chief minister Arvind Kejriwal held a meeting with his Cabinet colleagues and top officers on Wednesday to discuss the implementation of the “10 guarantees”, including uninterrupted power supply and basic facilities for unauthorised colonies.

Addressing reporters, Mr Kejriwal said he had given the heads of departments (HoDs) a week’s time to prepare an action plan on how to implement the “10 guarantees” mentioned in the “guarantee card” released by the ruling Aam Aadmi Party (AAP) in the run-up to the February 8 Delhi Assembly polls.

“The HoDs concerned have been directed to prepare a plan on how they will implement the 10 guarantees. We will make provisions for funds for the implementation of the guarantees in the upcoming budget,” the AAP supremo said.

The “Kejriwal ka Guarantee Card” (Kejriwal’s guarantee card) contains 10 “guarantees”, including a promise to reduce Delhi’s air pollution by three times. The chief minister also informed that a three-day session of the Delhi Legislative Assembly will commence on February 24. The decision was taken at a Cabinet meeting chaired by Mr Kejriwal on Wednesday. “The Cabinet has decided to convene a three-day session of the Delhi Assembly from February 24,” the chief minister told reporters. Newly-elected lawmakers will take oath on the first day, an official said, adding that the Speaker will also be chosen during the session. Sources said Ram Niwas Goel, who was the Speaker in the previous Assembly, is likely to retain the post.