Jat stir on hold, city heaves a sigh of relief

Metro services to run as usual; security arrangements to remain in force. 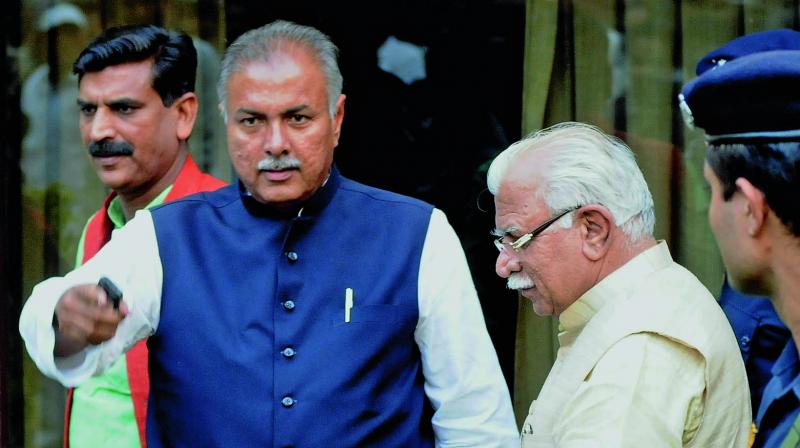 New Delhi: Delhi heaved a sigh of relief as the Jat protests, which were planned in the city on Monday, were called off after their leaders had a discussion with Haryana chief minister Manohar Lal Khattar on Sunday. However, the Delhi police security arrangements will remain in force till next orders.

“The protest planned by the All-India Jat Aarakshan Sangharsh Samiti in the national capital has been postponed. The security arrangements at the borders and New Delhi area will remain in place till next orders. It will be uplifted only after monitoring the situation,” said Dependra Pathak, special commissioner of police.

“We have made security arrangements in three tiers, right from the borders to the New Delhi area. We all know that the agitation has been called off. So, in view of that, certain restrictions on local train and Metro have been eased,” he added.

The Delhi police security preparation for Jat agitation is in felicitation mode or wait and watch mode, he said.

The traffic situation on Monday will remain normal as all the diversions have been cancelled. The New Delhi area will continue to have some traffic restriction till next orders.

“We have lifted all traffic restriction, but we request commuters to avoid the New Delhi area because security posts have been set up at several locations that might cause inconvenience to commuters,” said Garima Bhatnagar, joint commissioner, traffic. “All Metro, DTC, and railway routes ply as usual,” she added.

Following the decision to call off the agitation, the police announced that all Metro stations in Delhi-NCR will remain open. Also, no restrictions of   exits as announced earlier from Patel Chowk, Central Secretariat, Udyog Bhawan and Lok Kalyan Marg Station will apply. However, tight vigil will be maintained by the police in these stations.

On Saturday, the Delhi Metro Rail Corporation (DMRC) had announced that trains will not travel beyond the city’s borders from 11.30 pm on Sunday, while 12 stations in Central Delhi were be shut from 8 pm till further orders.