Adjoining areas such as Noida and Gurgaon witnessed a windy afternoon. 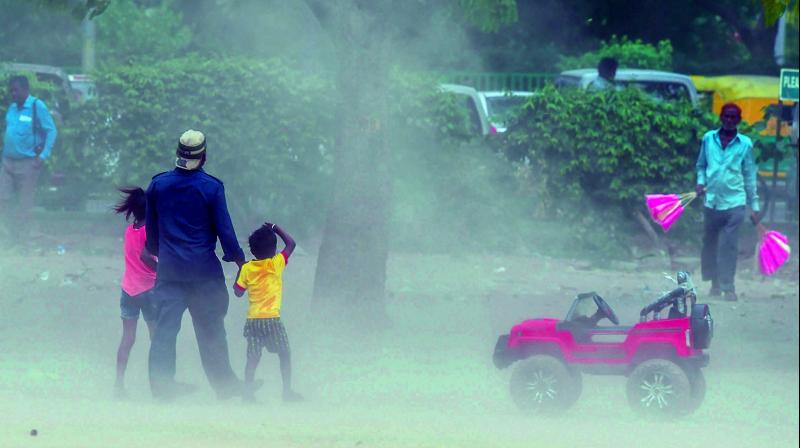 New Delhi: Delhiites were in for relief from rising mercury when sudden high speed winds and slight drizzle brought the maximum temperatures down a few notches.

Adjoining areas such as Noida and Gurgaon witnessed a windy afternoon. The winds blew up dust,  causing problems to motorists, who were caught unawares.

The sudden dust storm followed by rain over Delhi-National Capital Region can be attributed to the passage of successive western disturbances over the western Himalayan region.

In addition, the induced low also aided in giving these pre-monsoon showers over New Delhi and Noida, Gurgaon, Faridabad, and Ghaziabad.

It was a sultry day in the capital with the mercury settling at one notch above the season’s average.

The weatherman has predicted a rise in the maximum temperature which is likely to settle at 43° Celsius tomorrow.

The meteorological (MeT) department also said that there is a possibility of thundery development tomorrow evening.

“Skies will remain partly cloudy tomorrow. There is also possibility of thundery development in the evening,” the weather official said.

According to the weather forecast, the sky will mainly be clear in the coming week with the mercury going up till 44 degrees Celsius.

Skymet Weather, a private weather forecasting agency said that the pre-monsoon activity would reduce by Sunday and once again dry weather would prevail.

“The north westerlies are likely to get replaced by warm easterlies, which would trigger a rise in the maximum temperature,” the private forecasting agency said.