Jamia gets own ‘Wall of Heroes’

Heptulla, also unveiled a ‘Wall of Founders and Contributors’ to the grand old university. 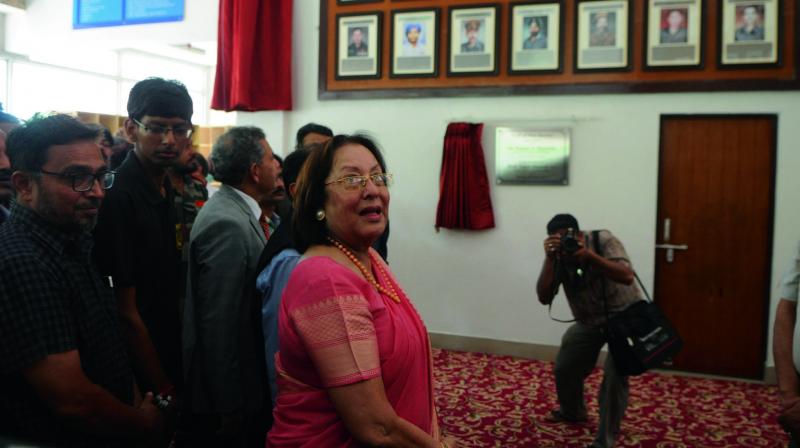 Jamia Milia Islamia Chancellor Dr Najma Heptulla during the inauguration of a ‘Hall of Fame’ in the campus in New Delhi on Monday. (Photo: Biplab Banerjee)

New Delhi: The “Wall of Heroes” displaying portraits of 21 “Param Vir Chakra” recipients and a national flag hoisted on a 102-feet high pole was inaugurated at Jamia Millia Islamia’s Dr Zakir Hussain Library by the chancellor and Governor of Manipur, Dr Najma A. Heptulla, on Monday.

She was accompanied by former Rajya Sabha member and BJP leader, Tarun Vijay, who had incepted the idea of instituting a “Wall of War Heroes” in various Central universities across the country.

Highlighting her emotional attachment with JMI, being the granddaughter of freedom fighter and independent India’s first education minister, Maulana Abul Kalam Azad, Dr Heptulla said, “Jamia is in my blood. It is a historical moment that I have the honour of inaugurating the national flag at an institution that has a rich nationalist past and has been in the forefront of the freedom struggle.”

“An institution that had its humble beginnings in Aligarh has today grown into an impressive university and has kept the promises and ideals fostered by its founders. I salute this spirit of JMI and its founders who set it up on solid bedrock of nationalism and unity in diversity”, she added. Adding to Dr Heptulla, Mr Vijay said, “It is very thoughtful of the university that they have displayed portraits of the war heroes and its founders facing each other. It would be a reminder to the future generations that wisdom and valour were fulfilled and came together in JMI.”

Being the Chancellor of two universities in Manipur, Dr. Heptulla is likely to connect JMI’s AJK Mass Communication Research Centre and the Centre for North East Studies and Policy Research with those universities.

“This would be in line with PM Narendra Modi’s North East policy and his motto of development for all encapsulated in Sabka Saath, Sabka Vika,” Dr. Heptulla added.