The architectural building has turned into a residing place for bats and pigeons. 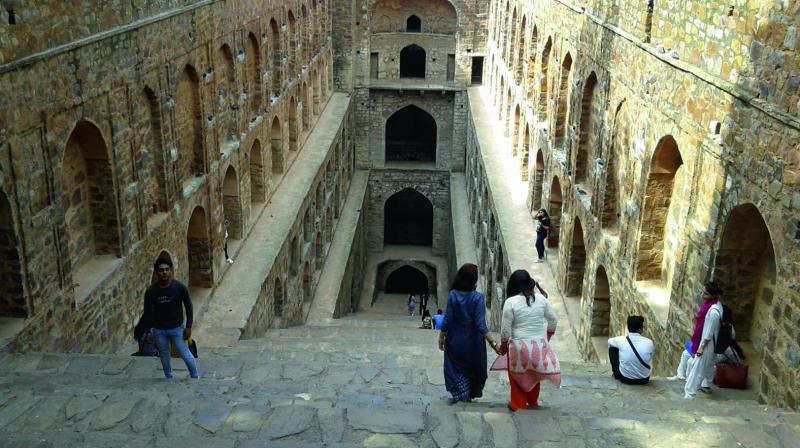 The Baoli used to have water earlier that has dried up in recent times.

New Delhi: Agrasen Ki Baoli, the famous monument located on Hailey Road near Connaught Place in New Delhi, is in need of restoration. The architectural building has turned into a residing place for bats and pigeons. One is only able to hear the gurgling sound of pigeons, and the squeaky chatter of bats echoing. Presently, Agrasen Ki Baoli has become a hub for couples who wish to spend some quality time together.

The Baoli used to have water earlier that has dried up in recent times. One can still see the bed of the reservoir that is filled with the feathers of birds and droppings. The silence deepens as one moves to the bottom of the stairs as the light of the day fades, making visitors feel as though they are in a place that is haunted.

Agrasen Ki Baoli is one of the popular tourist sites among the visitors in Delhi. The architectural building was originally built by Maharaja Agrasen, in the Mahabharat era, and later rebuilt by the Agrawal community in the 14th century, probably during the Tughlaq period.

The architectural monument is currently protected by the Archaeological Survey of India (ASI), and has a mammoth board indicating it’s national importance. The monument is divided into four levels with a flight of 108 steep steps leading down to the well. The steps are flanked by thick walls on both the sides with two series of arched niches at the first top and second levels.

The withering condition of the walls and the stinky water shed area calls for immediate restoration of the monument. The condition of the monument is getting worst with each passing day. However, this lofty monument that is considered haunted manages to attract tourists in the capital. The filthy black water is said to have an evil charm, has hypnotising people to their death by alluring them to jump in the reservoir.