The Central Pollution Control Board's (CPCB) National Air Quality Index has Delhi in the 'very poor' zone with a score of 326. 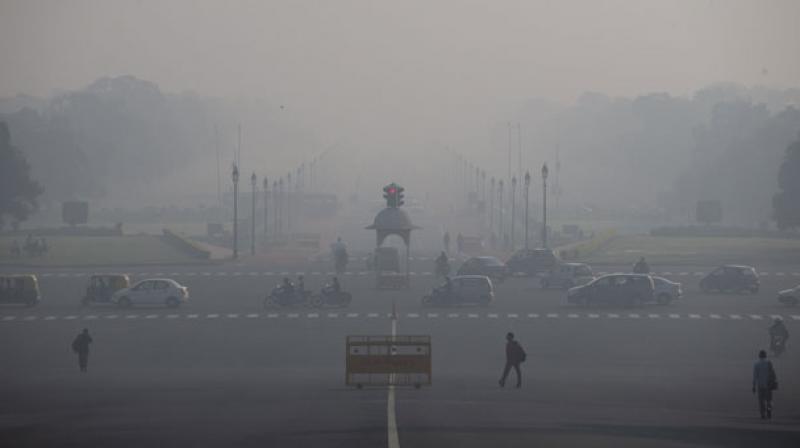 AQI value between 301-400 is classified as 'very poor'. Prolonged exposure to such air quality may trigger respiratory illness, the CPCB says. (Photo: File)

New Delhi: The air quality of Delhi, which breathed relatively clean air over the last two days, once again turned 'very poor' as the impact of sporadic drizzle in flushing out pollutants ebbed and more vehicles hit the streets on the first working day of the week.

However, forecasters have emphasised that the city's air quality will remain in the 'very poor' category and chances of it deteriorating further in the coming days is less as incursion of pollutants from external sources has stopped.

"More than Delhi, areas surrounding the city received drizzle. It helped wash out the accumulated particulates. That is the reason the city enjoyed the season's best quality air over the last two days.

But now the impact of rain is slowly diminishing. Temperature levels have dropped and moisture has also marginally increased. The current air quality is a play of those meteorological conditions and emissions from internal sources," SAFAR project director Gufran Beig said.

Incursion of emissions from external sources such as paddy stubble burning has stopped and the wind direction has also turned north-westerly, which is bringing cold wave from the upper Himalayas.

SAFAR (System of Air Quality and Weather Forecasting and Research), an agency of the Union Ministry of Earth Sciences, recorded the average values of PM2.5 and PM10 which are descriptions for ultrafine particulates which remain suspended in the air and enter the respiratory system with inhalation, causing a host of complications, both pulmonary and cardiovascular.