Parental neglect, lack of education and poverty forcing them into crime, say experts.

New Delhi: In the recent times, the national capital witnessed a spurt in crimes involving juveniles or children in conflict with the law (CCL). Children are being trafficked and handed over to organised crime rings in Delhi. The kids, mostly between 10 and 14 years of age, are brought to Delhi and trained in stealing wallets, cell phones and bags, and identifying targets for nearly a month.

Recently, a 10-year-old child was caught snatching a mobile phone in Rohini area. This is not just one case; incidents like these are not isolated. Juvenile delinquency is on the rise in the capital. Instead of pushing them into prostitution or child labour, the traffickers are earning more money by selling them to criminals. Being underage, they get away easily from the claws of stringent laws and make a comeback in the world of crime. 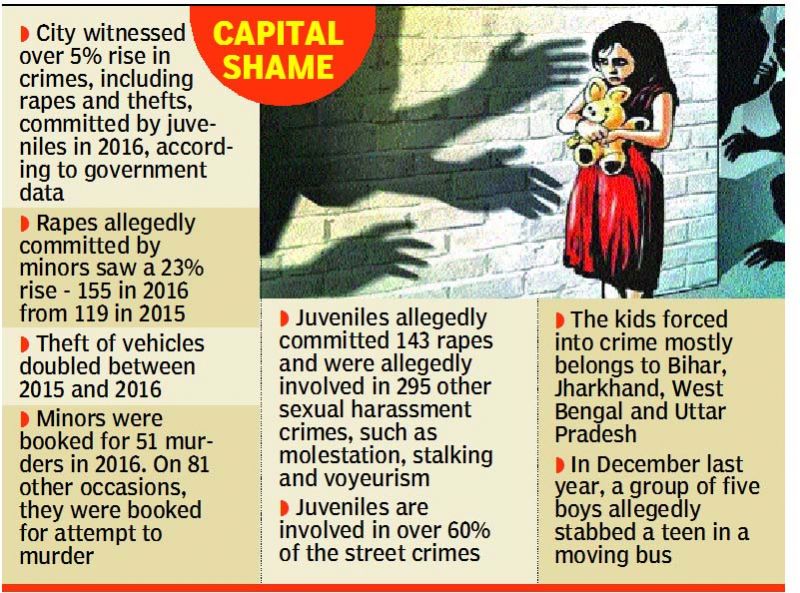 “Most juvenile pickpockets are under 14 and juvenile delinquency laws state that children of this age cannot be held accountable for their petty crimes. Even if the police nab them, they are taken to child welfare homes. After spending a few days in the shelters, these kids often escape and return to the crime world,” a senior police official said.

Numerous syndicates are trafficking children from various parts of the country to major cities, including the national capital. They are promised jobs but are forced into the world of crime instead. One such kid was recently nabbed by the locals and handed over to the police after being thrashed for trying to snatch a purse.

“The nexus between the interstate human traffickers and Delhi based criminal gangs is giving sleepless nights to the police as these gangs are training kids to become thieves,” said a senior official.

According to data released by the National Crime Records Bureau (NCRB), children committed more than six crimes per day in Delhi last year. The national capital accounted for 35.6 per cent of all offences committed by juveniles or CCLs in 19 metropolitan cities. A total of 2,368 cases against juveniles were registered in the national capital last year.

Experts say parental neglect, lack of education, poverty, and absence of a support system at school and home are forcing the juveniles into crime. A study by the Delhi Commission for Protection of Child Rights (DCPCR) has described parental neglect as the main factor that forces juveniles into the world of crime.