Arvind Kejriwal fails to file papers, delayed due to roadshow 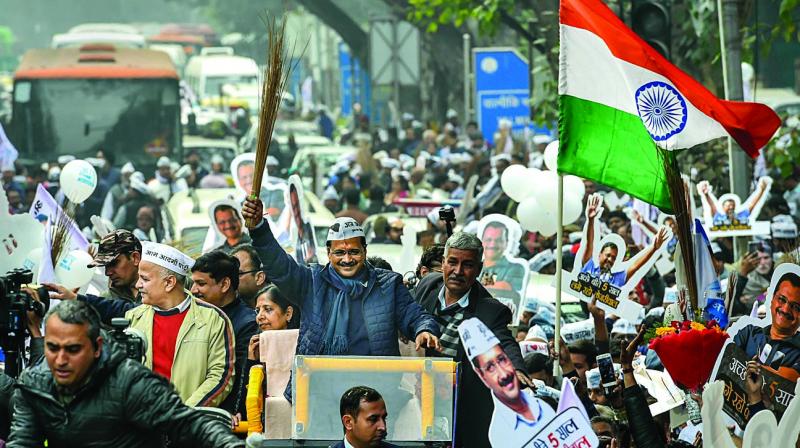 Chief minister Arvind Kejriwal during a roadshow before filing his nomination papers for the Assembly polls in New Delhi on Monday. (Photo: PTI)

New Delhi: Delhi chief minister Arvind Kejriwal will now file his nomination for next month’s Assembly election on Tuesday as he missed the day’s deadline due to a delay caused by his mega roadshow in the national capital.

The Aam Aadmi Party leader said he was to file his nomination on Monday but he got delayed due to the roadshow.

He said that he will file his nomination at the sub divisional magistrate’s office in Jamnagar House on Tuesday, which is also the last day for the filing of nomination for the February 8 polls in Delhi.

“I love you,” a visibly moved Mr Kejriwal called out to his supporters as they walked with him from the iconic Valmiki Mandir near R.K. Ashram Marg Metro station to Hanuman Mandir near Connaught Place traversing about 2.2 km in over two hours and dancing to the tunes of the party’s anthem—‘Acche beete paanch saal, lage raho Kejriwal (past five years have been good, keep going Kejriwal).’

Before joining the ‘Walk With Kejriwal’ roadshow, the chief minister sought the blessings of his parents at his residence. His entire family, including his wife, two children, and parents, reached the Valmiki Mandir at noon from where the Aam Aadmi Party leader commenced his roadshow ahead of filing his nomination from the New Delhi constituency, which he had won in the 2013 and 2015 Assembly elections.

Flanked by his deputy Manish Sisodia, Cabinet colleague Gopal Rai, and AAP MP Sanjay Singh, Mr Kejriwal started moving in his yellow-coloured open jeep towards Connaught Place through the Panchkuian Marg. The roadshow proceeded into the Inner Circle of CP and then on to Baba Kharak Singh Marg, where it came to a halt at Hanuman Mandir.

Mr Kejriwal hoped that the people were happy with the development of Delhi in the last five years.

On Sunday, Mr Kejriwal released a “10-point guarantee card” to voters that promised free power, 24-hour drinking water in tap, and a world-class education to every child. Along with it, he promised a clean environment, including a clean Yamuna, and housing to every slum dweller.

Opposition Congress said the “guarantee card” was an election jumla (gimmick). BJP called it a “lie,” saying AAP was staring at defeat.

The ruling AAP is seeking re-election in the next month’s polls after recording a massive win in the 2015 elections.

The term of the Delhi Assembly ends on February 22 and a new government must be in place before that date.