No transparency in PDS, says study 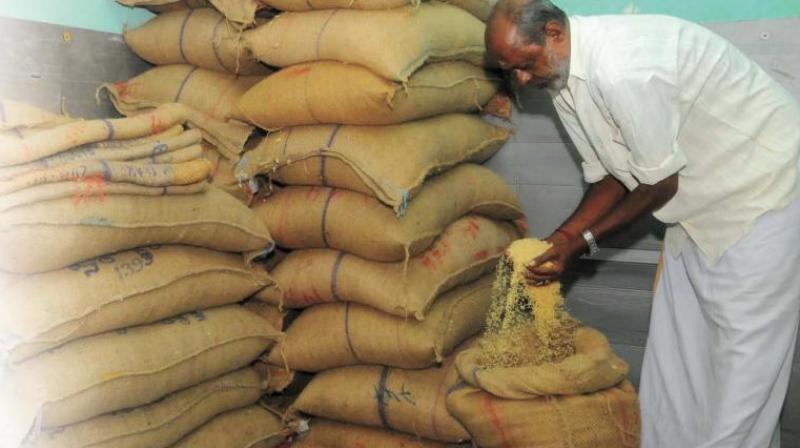 The study, undertaken by the Delhi Rozi Roti Adhikar Abhiyan and Satark Nagrik Sangathan during 2016-17, focused on 221 shops (approximately 10 per cent of the total ration shops in Delhi) located across eight districts. (Representational image)

New Delhi: A study on the status of the implementation of the National Food Security Act (NFSA) in Delhi has found that the public distribution system (PDS) is not working transparently. The study claimed that even four years after the rollout of the act, lakhs of consumers are still at the mercy of ration dealers in the absence of transparency and grievance redress mechanisms.

It found that 60 per cent of the ration shops routinely remain closed during working hours, which is illegal and constitutes a ground for revocation of license under the law. Other issues include dealers overcharging and supplying food grains below prescribed limits, often of poor quality.

The study, undertaken by the Delhi Rozi Roti Adhikar Abhiyan and Satark Nagrik Sangathan during 2016-17, focused on 221 shops (approximately 10 per cent of the total ration shops in Delhi) located across eight districts.

In many shops, it was found that the information on the scale of entitlement and price was outdated and related to categories of ration cards which have been discontinued since the implementation of the NFSA. This essentially means that consumers were being overcharged and are deprived of enhanced benefits, the study claims.

The NFSA was passed by the Parliament in 2013. Under the act, upto 50 per cent of the urban population and upto 75 per cent of rural population is entitled to subsidised grains under PDS. Since the legislation was enforced, more than 19 lakh ration cards have been issued in Delhi, which has around 2,257 fair price shops.

Families under the Antodaya category are entitled to 35 kg subsidised food grains per family per month while those identified as priority households are entitled to 5 kg, including rice and wheat at Rs 3 and Rs 2 per kg respectively. Most often shopkeepers indulge in corruption by overcharging or under supplying for each category of ration card, the report said.

“Only 55 per cent of the surveyed shops displayed details regarding quantity of entitlements for different ration cards while 57 per cent provided details of the prices of food grains for different categories of ration cards,” it said. Other key findings of the report include the fact that only 6 per cent of the surveyed shops were found displaying details of their stock received during the month while only 16 per cent displayed the daily opening and closing of stock of each food grain, which is in violation of the laid down norms.

This assumes importance as ration is often denied to cardholders on the pretext that the government has not supplied the requisite stock of food grains to the shop, the study, anchored by academics Anjali Bhardwaj, Amrita Johri, and Dipa Sinha among others, observed.