Mr Vardhan said that for monitoring of air quality days have been classified into ‘good’, ‘satisfactory’ and ‘moderate’. 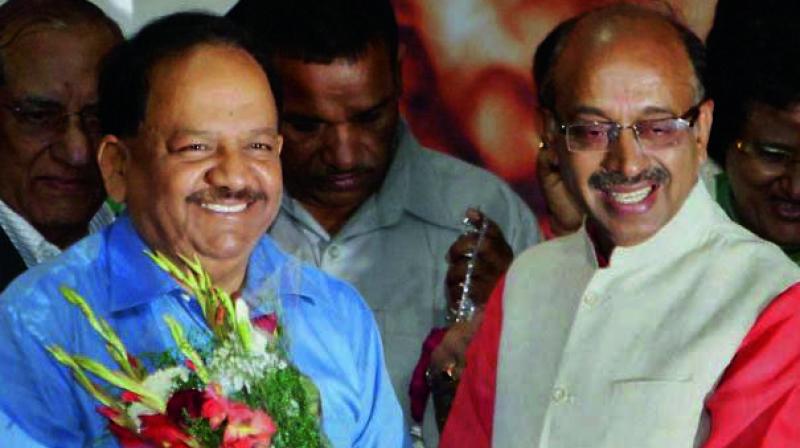 New Delhi: Union Environment minister Harsh Vardhan said on Friday the air quality in Delhi a day after Diwali was “much better” compared to last year and the number of “poor and very poor” days have come down significantly.

“It is not even 24 hours since the Diwali celebrations, every person is breathing normally and no person is having difficulty in breathing. There is no smog,” he said. Mr Vardhan said his ministry had “prepared even more” this year.

“I personally wrote to 2-2.5 lakh school principals across the country. In Delhi, thousands of children campaigned for green and ‘Harit Diwali’ for the past two months... It is the result of these (steps) that this year (the air quality) is much better,” he said. Earlier on Friday, the pollution monitor of the state-run System of Air Quality Forecasting and Research (Safar) turned a deep shade of brown, indicating “severe” air quality in the city.

However, Safar has predicted a relatively cleaner post- Diwali air due to favourable meteorological conditions, which are helping prevent the smoke-filled air from the agricultural belt of Haryana and Punjab from entering the national capital.

Mr Vardhan said that for monitoring of air quality days have been classified into ‘good’, ‘satisfactory’ and ‘moderate’. “‘Poor’ and ‘very poor’ days significantly came down. ‘Severe’ days did not even happen this year,” he said.

Last year, the air quality in Delhi and surrounding areas deteriorated significantly due to rampant cracker bursting. This year, the Supreme Court banned the sale of firecrackers in Delhi-NCR before Diwali and the ban would continue till November 1.