Pictures of the event, which began at 5 am showed relatively clear skies, with the early morning sun visible through a sight haze. 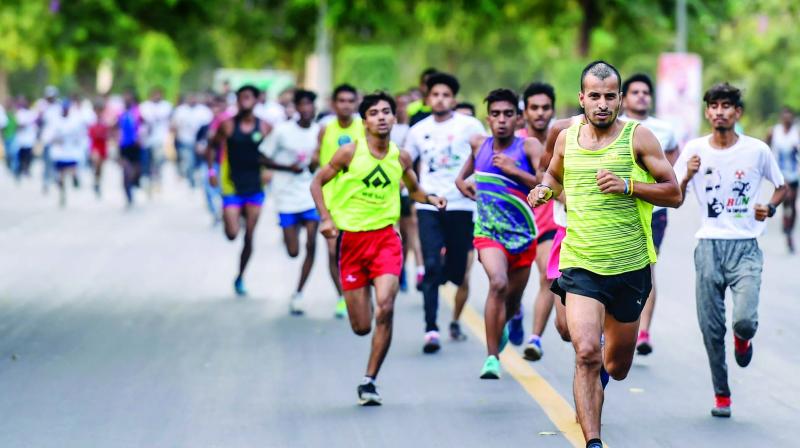 After medical experts urged the cancelling of last year's race, marathon organisers responded by bringing the race date forward to October, away from Diwali in November when the firecrackers are set off. (Representational Image)

India is home to the world's 14 most polluted cities. Last year the smoke from burning crop waste in states of Punjab and Haryana and thousands of firecrackers contributed to a toxic smog that blanketed New Delhi and a large part of northern India in toxic smog.

Chief Minister Arvind Kejriwal warned New Delhi would face the same fate this year if the Narendra Modi-led Bharatiya Janata Party government did not do more to combat pollution.

After medical experts urged the cancelling of last year's race, marathon organisers responded by bringing the race date forward to October, away from Diwali in November when the firecrackers are set off.

They also tried to dampen down the dust that hangs over the city in winter, including reagents from the mining industry to treat roads, dropping water vapour along the course from a height of 20 feet.

The techniques also included using the UHF waves to dispel pollution from particulate matter measuring only 2.5 microns, known as PM2.5, whose small size - about 30 times smaller than a human hair - allows it to lodge deep in the lungs, damaging the respiratory system.

"It was a great day with clear skies and no pollution-related incidents among our 35,000 runners," Vivek Singh, a managing director of race promoter Procam International told news agency Reuters.

He said the Delhi government, which last year resorted to shutting power stations and banning some cars from roads to clear the air, should look at using the UHF technology, manufactured by a Bangalore-based company Devic Earth, to mitigate pollution.

"We have shown that it works and made a point to tell the authorities," he added.

Pictures of the event, which began at 5 am (0030 GMT) showed relatively clear skies, with the early morning sun visible through a sight haze.

"I did doubt signing up, but it was just the usual morning haze, and didn't feel hard to run in," said Emily Jackson, a British carbon market analyst living in New Delhi who competed in the race for the first time.

"I only saw one person with a mask."

Singh said the measures had reduced pollution by "at least" 30 per cent during the race, though air quality at monitoring stations near the route were still rated as "very unhealthy" under international standards.

The women's race was won by Ethiopian Tsehay Gemechu in a course-record time of 1:06:50, while teenage compatriot Andamalak Belihu finished first in the men's race with a time of 59:18.