Since 2001, no share for Delhi in Central taxes: Sisodia

Sisodia also referred to the erstwhile Article 270 (3), which discussed the share of taxes between the Centre and the Union Territories. 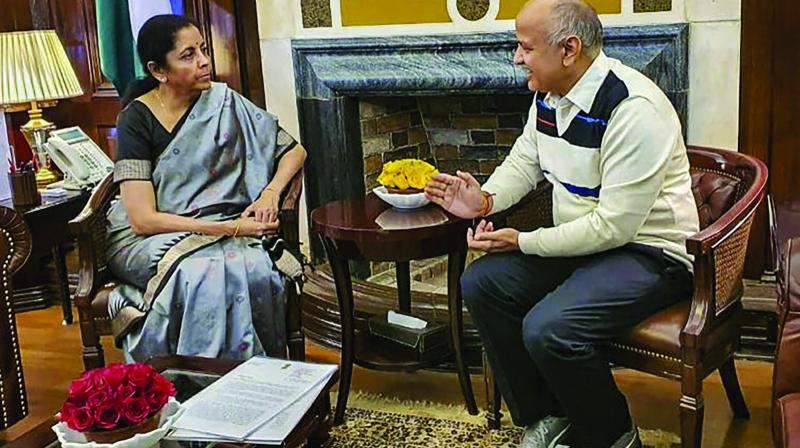 New Delhi: Deputy chief minister Manish Sisodia on Friday met Union finance minister Nirmala Sitharaman and demanded Delhi’s share in Central taxes, which he said would help speed up cleaning of the Yamuna and make arrangements for sufficient electricity and water supply in the city.

Taking to Twitter, Mr Sisodia, who also holds the finance portfolio in the AAP government, said Delhi has not been given any share in the Central taxes since 2001.

In the meeting, he also demanded funds for all the three municipal corporations in Delhi the same way as Centre gives money to civic bodies in other states. According to a government statement, Mr Sisodia, in a letter to Ms Sitharaman, urged her to consider providing Delhi a share in the Central taxes.

Mr Sisodia also referred to the erstwhile Article 270 (3), which discussed the share of taxes between the Centre and the Union Territories.

While the Delhi government has to maintain infrastructure that meets world standards, it also has to improve supply of civic amenities to the burgeoning population who legitimately expect employment and a fulsome life in the city, Mr Sisodia said in the letter.

Consequently, large investments in education, health, social, food securities, transport, roads, and hospitals among others have to be made, the deputy chief minister said. “But for the inadvertent omission of erstwhile Article 270 (3) of the Constitution of India, the government of NCT of Delhi would be getting its legitimate share in Central taxes of at least `7,000 crore per annum, with an appropriate annual enhancement like other states, to finance the development needs,” Mr Sisodia said.

He also urged Ms Sitharaman to provide additional Terms of Reference to the Fifteenth Finance Commission to enable it to recommend legitimate share of NCT of Delhi in the Central taxes. “The NCT of Delhi has the character of a state and therefore is eligible to be treated at par with other states for receiving a share of the Central taxes,” Mr Sisodia said.

In the letter, he also said that the Fifteenth Finance Commission, in its report for the financial year 2020-21, has provided one per cent of the divisible pool for the newly formed Union Territories of Jammu and Kashmir and Ladakh, and assign the same to the Central government.

“As you are aware, the Union Territory of Jammu and Kashmir and the NCT of Delhi are on a similar footing within our Constitution as Union Territories with legislature. Accordingly, additional terms of reference to the finance commission at this stage would bring justice to the people of the NCT of Delhi and rectify the anomaly created by the inadvertent omission of Article 270 (3),” he added.