Stiff resistance from traders, lack of a foolproof traffic management, parking are the few reasons cited for non-implementation. 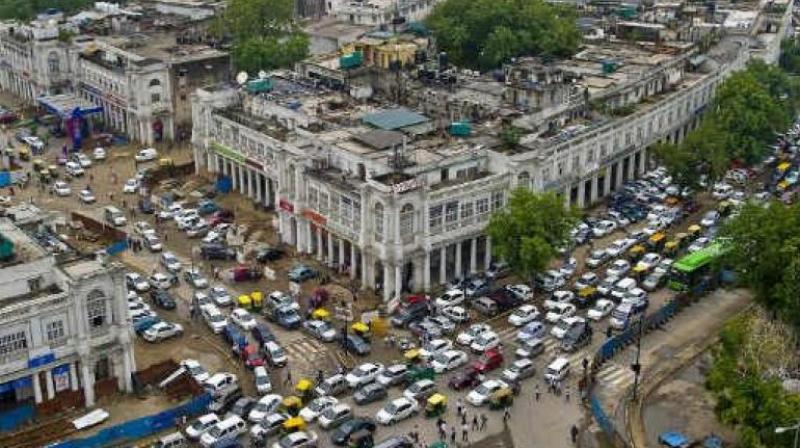 The three-month trial for a car-free Connaught Place, which the NDMC had planned in February 2017, was put off after opposition from traders at the popular shopping hub. (Photo: File/PTI)

New Delhi: Over a year after the government announced that Connaught Place would be made a car-free zone, the ambitious plan to decongest the heritage shopping arcade continues to remain only on paper.

Stiff resistance from traders, inadequate parking facilities and lack of a foolproof traffic management plan are among few reasons cited for the non-implementation of the plan.

The then Urban and Development Minister Venkaiah Naidu had in January 2017 announced that the middle and inner circles of the British-era built Connaught Place were to be made no-vehicle zones for three months, on an experimental basis to decongest the area.

The New Delhi Municipal Council (NDMC), which was supposed to implement the plan, is non-committal about when the plan will take off. "There are lot of lacunae in the plan and detailed preparation is required to make such an area vehicle free which gets around 5 lakh visitors daily. We are on it but nothing can be committed as of now about when will the plan take off," a senior NDMC official said on the condition of anonymity.

The three-month trial for a car-free Connaught Place, which the NDMC had planned in February 2017, was put off after opposition from traders at the popular shopping hub.

In August 2017, the civic body decided to experiment the implementation of the plan on weekends. However, the New Delhi Traders Association (NDTA) had threatened to go on strike saying Saturdays and Sundays were peak days of business for them.

"First adequate parking has to be provided to visitors to encourage them to walk in the lanes of CP and abandon their vehicles. There has to be a last mile connectivity and Delhi Traffic police has to come up with a foolproof traffic management plan," the official said.

"A consensus is also to be developed with the traders as we also do not want their businesses which have been running in CP since decades to suffer," the official added.

The authorities had proposed two ways to implement the project. In the first, cars were to be allowed to enter from Janpath, people will alight at Palika Bazar or Palika Parking and exit through Baba Kharak Singh Marg.

The second plan had proposed that cars will be allowed in the middle circle but only to drop visitors and shoppers, making it a no-parking zone. Besides these, there was also a plan to introduce a robust cycle ride policy at the metro stations falling in the NDMC areas.