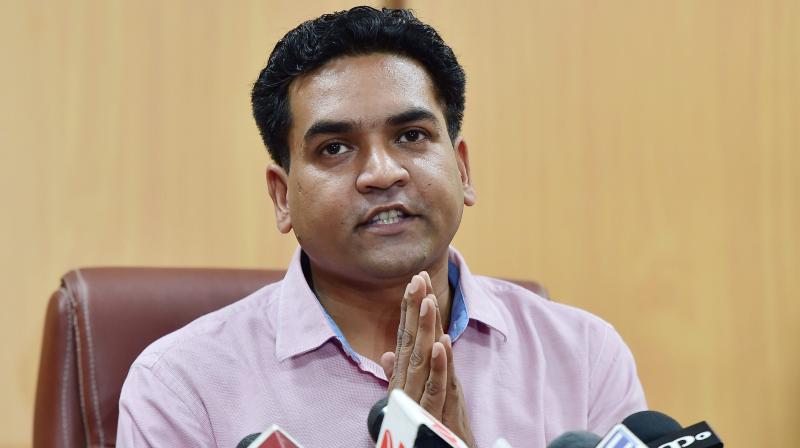 New Delhi: Sacked Delhi minister Kapil Mishra on Sunday alleged that Aam Aadmi Party (AAP) leader Ashutosh and Sanjay Singh’s Russia trip was funded by a person with alleged direct links with a company which is facing probe in a Rs 400 crore scam.

Continuing his offensive remarks against the Arvind Kejriwal government, which shunted him for “non-performance,” Mr Mishra posed nine questions to his political mentor, including whether he was aware of the source of Russia tour’s funding and why no action was taken against the company after AAP returned to power.

Delhi government spokesperson Nagender Sharma rubbished the allegations and said that Mr Mishra had been given a “horribly wrong script.”

Mr Ashutosh and Mr Singh’s trip “was sponsored by a man who is being probed for the Rs 400-crore high-security number plate scam,” Mr Mishra said. He also took out time to apologise to former AAP leaders Prashant Bhushan and Yogendar Yadav for not heeding to their views.

The duo was expelled from AAP in April 2015 for “anti-party activities” after they questioned Mr Kejriwal’s leadership. Holding himself responsible for their ousting, Mr Mishra said he was acting on the directions of Mr Kejriwal. The two ex-AAP leaders floated a new political party, Swaraj India, last year.

Mr Mishra, who has been suspended from AAP’s primary membership, said he will stay in the party to cleanse it. He invited former India Against Corruption (IAC) volunteers to help him make Delhi “corruption-free” and “Kejriwal-free.”

The former water minister also alleged that there was a scam of high-security number plates that surfaced during Mr Kejriwal government’s first stint and is currently being probed by the Anti-Corruption Branch (ACB).