Back in office, CM assesses water, power supply in city

Skips yoga event due to health issues, heads for treatment. 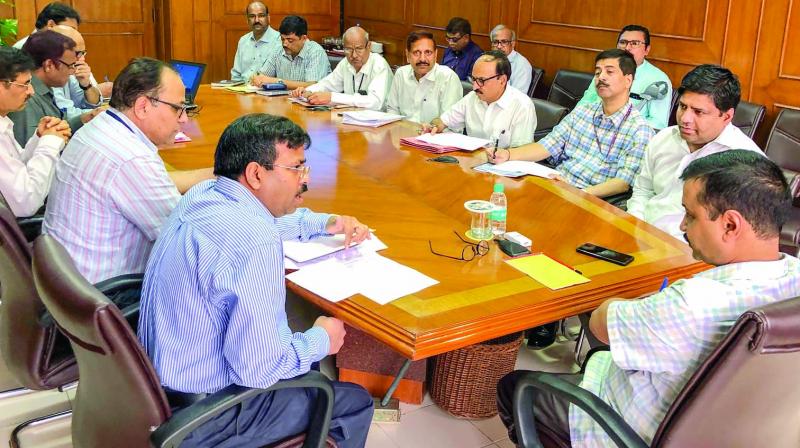 Chief minister Arvind Kejriwal during a meeting with Delhi Jal board officials at the Delhi secretariat on Thursday before living for Bengaluru. (Photo: PTI)

New Delhi: On the first day of work since his sit-in at the Raj Niwas ended, chief minister Arvind Kejriwal on Thursday held back-to-back meetings at the Delhi secretariat to review power and water supply situation in the city, before leaving for Bengaluru for treatment.

Mr Kejriwal, found having a raised sugar level, also had to give a miss to the International Yoga Day celebrations.

The chief minister sought daily reports from officials concerned on the issues, the government functionaries said. However, the chief minister did not hold any meeting with the IAS officers regarding their safety and security.

He also chaired a Cabinet meeting before leaving for Bengaluru to join a 10-day naturopathy treatment for his blood sugar condition. Mr Kejriwal was charged by the Opposition BJP and Congress of sitting on dharna for nine long days at a time when people were facing water and power supply woes in the city. Mr Kejriwal had cancelled all his scheduled meetings on Wednesday, saying he was not feeling well. He left for Bengaluru on Thursday as he has been suffering from high sugar levels for the past few days.

In the meeting with Delhi Jal Board (DJB) officials, the chief minister, who is also the chairperson of the DJB, reviewed projects for augmentation for water supply and other matters.

“He directed the officials to send a daily report to him on the water situation in city with details of area-wise problem, action taken and timeline of solution of the problems and whether they were solved or not,” said the official.

In the meeting with officials of the power department and distribution companies, Mr Kejriwal took stock of supply situation and sough daily report detailing reason and duration of outages and restoration of power, an official said.

He also directed officials to implement the policy of subsidy for tenants at the earliest. The meeting was also attended by power Minister Satyendar Jain.

Mr Kejriwal alongwith his cabinet colleagues staged dharna at office of LG office that ended on June 19 after IAS officers started attending meetings of ministers. They had boycotted meetings as protest over alleged assault on Chief Secretary Anshu Prakash at Mr Kerjriwal’s residence in February.