Delhiites turn up in huge numbers to mark yoga day

At the Red Fort lawns, around 50,00 women and men, all clad in white, converged at the venue and participated in the mass yoga event. 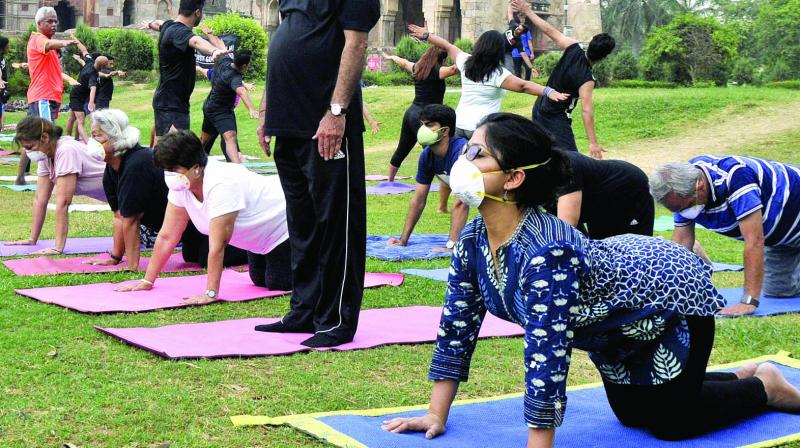 New Delhi: From sprawling Rajpath to the lawns of Red Fort to old municipal parks and gardens across different parts of the national capital, Delhiites turned up in large numbers to mark the fourth edition of the International Yoga Day on Thursday.

At the Red Fort lawns, around 50,00 women and men converged at the venue and participated in the mass yoga event organised by the Brahma Kumaris.

The Rajpath looked majestic as old and young, dressed in colourful attire, rolled out their mats and performed various asanas. Traffic was restricted around the area during the time.

Union minister Harsh Vardhan, Delhi L-G Anil Baijal and senior BJP leader Meenakshi Lekhi took part in the celebrations. CM Arvind Kejri-wal, whose name was there in the guest list, was not to be seen.

The events began with the live telecast of the speeches of Prime Minister Narendra Modi at the screens installed at the venues following which they performed yogic exercises. In Jawaharlal Nehru University, more than 750 students, faculty and staff members participated in the International Day of Yoga celebration on Thursday, said a statement from the varsity.

As many as 2000 police personnel also rolled out their exercise mats, stret-ching themselves and holding various yoga asanas at Thyagraj Stadium in the city.

The event, organised by the Delhi police at the indoor stadium on the occasion of the fourth International Yoga Day, were participated by the police personnel of all police districts in the capital, said a police official.

“Everyone today is living their life in a hurry. From sleeping less to working up late, our life has become a race. It is only Yoga that can bring peace and good health to us in our busy some and stressed schedule,” said Rohit Kumar Pandit a resident of Madhu Vihar.

“I think yoga is very important and celebrating it is really necessary because today we live in a time which is very stressful and moving way too fast and we are overloaded with anxiety. And out of all of this yoga is one thing that really helps us in releasing stress, rejuvenates us. It’s not just about being healthy; it’s about mental peace,” said Seemab, a 22-year-old student of Development communication at AJK MCRC, Jamia Millia Islamia.

Elaborate security arrangements were put in place in the city to ensure no untoward incident.

Besides, several yoga events were organised in various parks in the city. Several Union ministries also hosted events in their office premises for their employees.