After uproar, busts moved from Delhi University to ABVP office

DUSU president Shakti Singh said: “We are in talks with the university administration over the issue.” 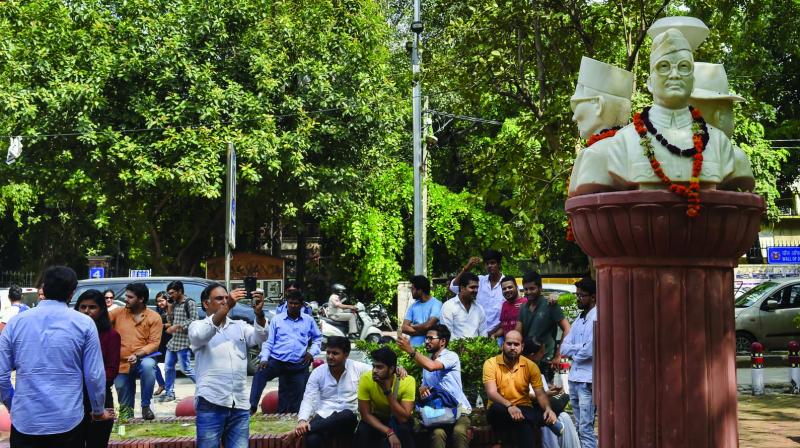 NEW DELHI: A day after busts of Subhash Chandra Bose, Bhagat Singh and Veer Savarkar were installed outside the Arts Faculty, the Delhi Akhil Bharatiya Vidyarthi Parishad on Wednesday instructed its office-bearers in Delhi University Students’ Union (DUSU) to shift the busts till the time permission is taken from the authorities.

DUSU president Shakti Singh said: “We are in talks with the university administration over the issue.”

The RSS affiliated ABVP-led Delhi University Students’ Union had installed the busts on Tuesday outside the Arts Faculty without permission, leading to a controversy. ABVP’s state media in-charge Ashutosh Singh said on Wednesday that installation of the busts was an initiative of the DUSU. The ABVP is of the view that it should have been done with due permission.

No immediate reaction was available from the varsity. A senior ABVP functionary said: “It (ABVP) has a clear view that the statues should be installed on the DU campus with the permission of the varsity administration and other concerned authorities.”

The ABVP has made it clear to the students’ union office-bearers that the busts should be kept in the DUSU office until permission is given, he added.

The move has been criticised by the Congress-affiliated NSUI and Left-backed AISA, which said Savarkar cannot be kept on the same pedestal as Bose and Bhagat Singh.

Delhi University Students’ Union polls to be held on September 12