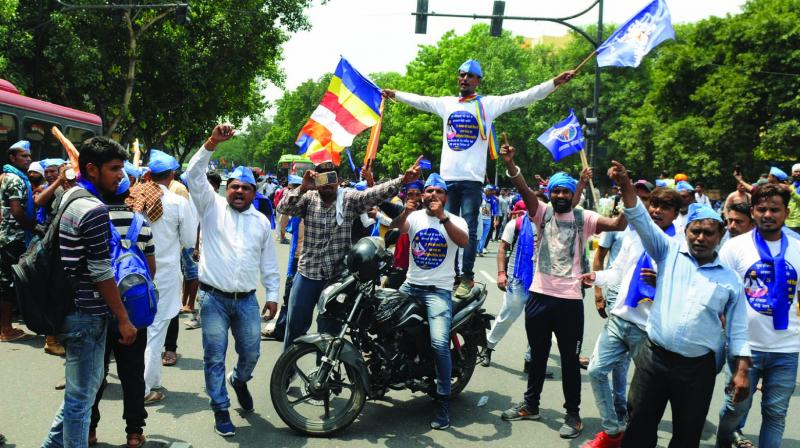 NEW DELHI: Bhim Army chief Chandrashekhar Azad and over 50 other agitators were detained by the Delhi police after the dalit protest over demolition of Saint Ravidas temple turned violent on Wednesday evening in South Delhi’s Tughlakabad area.

The police resorted to mild lathicharge and used tear gas to disperse the violent agitators after the protesters created mayhem by setting a couple of two-wheelers ablaze and vandalised a police vehicle. The agitators further vandalised many vehicles which were parked on the roads in the area and even pelted stones.

The dalit agitators were protesting against the demolition of Saint Ravidas temple. The Bhim Army claimed that the police fired at the protesters. However, the Police denied any such act.

According to the police, the protesters set fire to two motorcycles and vandalised a police vehicle and injured few policemen. “Police lobbed tear gas shells and used mild lathicharge to disperse the crowd and detained over 50 persons including Azad,” the senior official said.

The protesters turned violent during their march to the site of the temple demolished by the Delhi Development Authority on August 10 on the orders of the Supreme Court. Later, the situation was said to be normalised under heavy police presence.

Earlier on Wednesday morning, the commuters faced a hard time on Wednesday as the traffic between Jhandewalan and Ramlila Maidan stretch was crawling due to the protest held by scores of dalits regarding the demolition of Ravidas temple. The area turned into a sea of blue as thousands of dalits from pan India took to the streets on Wednesday to protest against the recent demolition of a Ravidas Mandir.

Gathered under the banner of Akhil Bharatiya Sant Shiromani Guru Ravidas Mandir Sanyukta Sanrakhshan Samiti, an umbrella body of dalit groups formed for this temple movement, the protesters resolved to continue the fight till their demands were met. Some even proceeded on an indefinite hunger strike at the Ramilia Maidan.