The rest would be of ministries and departments of Government of India. 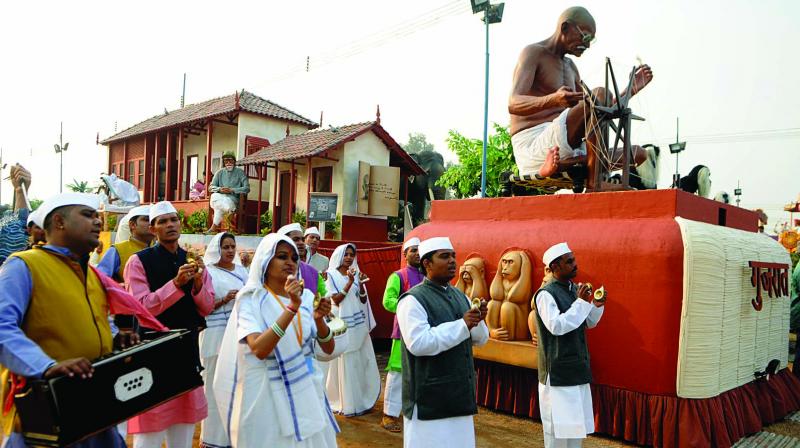 New Delhi: For the first time, a tableau of All India Radio will be leading a series of 23 tableaux during the Republic Day parade this year. The parade will feature Prime Minister Narendra Modi's monthly address 'Mann Ki Baat'.

The AIR said the tableau will have various scenes depicting its journey like Mahatma Gandhi's maiden and only broadcast in the wake of communal riots after Partition and Prime Minister Modi's monthly address.

There will be a total of 23 tableaux in the parade, out of which 14 would be representing different states and Union Territories, Defence PRO Nampibou Marinmai told reporters here today.

The rest would be of ministries and departments of Government of India.

"The idea was conceived during May last year, and after efforts at various levels, we were able to make it happen," an AIR official said, adding that it was the first time that AIR was having a representation at the parade.

The public broadcaster said that the tableau will showcase how the AIR plays an "integrating role" with the diverse population of India.

"Farmers listening to radio while engrossed in agriculture operation, soldiers listening to popular programmes of AIR like 'Jaimala' from advance locations in frontier; it also shows community listening of 'Mann Ki Baat', a heart to heart monthly conversation of the Prime Minister with the citizenry," the AIR said.

It will also showcase AIR's "modernisation process" and has been designed on the model of the historic Broadcasting House, it said. After the AIR, Ministry of External Affairs will have two tableaux representing India's relationship with the ASEAN countries.

While the first one displays shared values, education and trade, the second tableau will project culture and religion as the strongest linkage between India and South East Asia.

Then there will be 14 tableaux starting with Karnataka's 'wildlife' theme. The other states to participate are Madhya Pradesh, Tripura, Jammu and Kashmir, Maharashtra, Lakshadweep, Kerala, Assam, Punjab, Himachal Pradesh, Manipur and Gujarat etc.

The Gujarat tableau will have a diorama on various activities of Sabarmati Ashram and a mural on Gandhiji's departure for Dandi March.