Facilitating smooth passage of the parade, the Police will restrict the movement of traffic on certain roads in the national capital 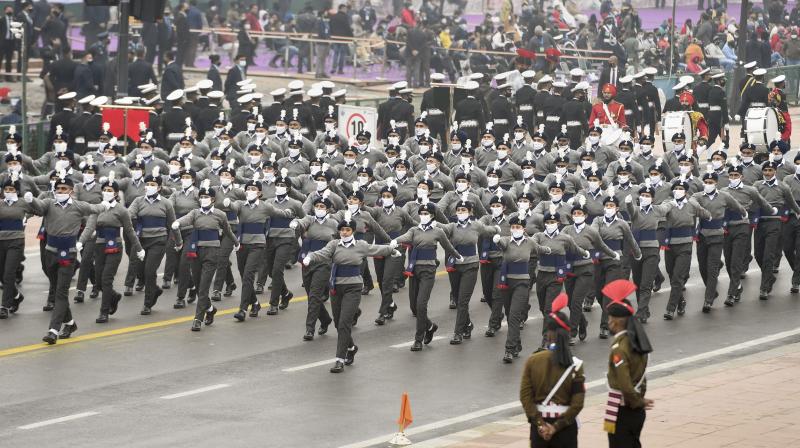 New Delhi: Ahead of the Republic Day parade, a full dress parade rehearsal was held at Rajpath here on Sunday.

The rehearsal commenced from Vijay Chowk.

The rehearsal took the route that the parade will take on January 26 - proceeding towards the Red Fort via Rajpath.

Meanwhile, Delhi Police has also issued a traffic advisory in the city amid the same.

According to the advisory, traffic movement at certain roads would be blocked. Bus stations and metro services have also been included in the traffic advisory. The Police had earlier issued a detailed guideline for the public including the ban on the use of drones in the city.

Facilitating smooth passage of the parade, the Police will restrict the movement of traffic on certain roads in the national capital.

According to the advisory, the Police had informed that no traffic will be allowed on Rajpath from Vijay Chowk to India Gate from 6 pm on January 22 till the parade rehearsals get over on January 23.

It also had informed that no cross traffic would be let on Rajpath from 11 pm on January 23 at Rafi Marg, Janpath, Man Singh Road till parade rehearsals are over.

The Police also informed the closing of C'-Hexagon-India Gate from 9.15 AM on January 23 till the entire parade and Tableaux enter the National Stadium.

The police urged the road commuters to plan their journey in advance accordingly and avoid the route of the parade from 9 am to 12:30 pm, for their own convenience.

The police also suggested alternative routes for the commuters.

Delhi Police also added that the movement of the city bus services from certain points will be blocked during the parade.

The traffic police have ensured that those who are going from North Delhi to New Delhi or Old Delhi railway stations will not face any restrictions. However, they have been advised to plan ahead and provide time for possible delays.

Although metro services will continue to run, some stations will be closed during the parade and the rehearsal.

On January 23 and 26, entry and exit gates will be closed at Central Secretariat and Udyog Bhawan stations from 5 am to 12 noon.

Lok Kalyan Marg and Patel Chowk metro stations will remain closed from 8.45 am to noon on both days.

In a first, India will begin Republic Day celebrations from January 23 instead of January 24, to include the birth anniversary of late freedom fighter Netaji Subhas Chandra Bose.

To commence the celebrations of Republic Day, Prime Minister Narendra Modi, on the occasion of Netaji's 125th birth anniversary, will unveil the hologram statue of the freedom fighter at India Gate in Delhi on Sunday at around 6 pm.

Republic Day is celebrated annually on January 26 every year. As per sources, the Republic Day celebrations will end on January 30, the day Mahatma Gandhi was assassinated.