Police zeroes in on ATM’s custodian after SBI orders probe. 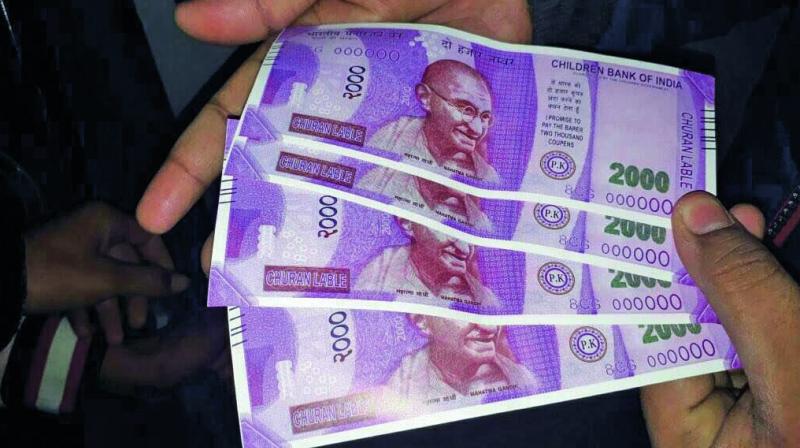 Except for their colour and size, the notes have very little similarities to the real Rs 2,000 note.

New Delhi: The State Bank of India has ordered an investigation after a customer complained that its ATM had in South Delhi’s Sangam Vihar had dispensed four fake notes of Rs 2,000 denomination.

Except for their colour and size, the notes have very little similarities to the real Rs 2,000 note. Instead of RBI, “Children Bank of India” is written on them in English, and in Hindi it says “Bharatiya Manoranjan Bank”.

In place of the official mark, a little box said “Churan Lable (label)”, and the note promised 2,000 “coupens” instead of rupees to the “barer”. The notes also had “PK” written on them in place of the RBI stamp. “This is mischief played by someone. We are trying to ascertain whether the person deputed by the agency, hired by the bank, was involved,” a senior SBI official.

Police said that the notes are children’s play notes, easily available at toys shop. One Mohd. Isha, custodian of Brinks India Pvt. Ltd., who works for the SBI ATM, is being probed.

The matter has even caught the attention of CM Arvind Kejriwal who on Wednesday slammed Prime Minister Narendra Modi. “A Prime Minister who can’t even print notes properly; how can he run the country? He has reduced the whole nation into a laughing stock,” the Mr Kejriwal tweeted

A senior SBI official said that the bank was investigating the matter. “This is a mischief played by someone. We are trying to ascertain whether the person deputed by the agency, hired by the bank, was involved in the mischief.”

It all began on February 6 when Rohit Kumar, who works as a customer care executive at a call centre in Chhatarpur, had gone to withdraw cash from the SBI ATM in Sangam Vihar. He got four notes of Rs 2,000 denomination which had “Churan Lable” written on them in place of the official watermark.

“We zeroed in on Mohd. Isha, custodian of the Brinks India Pvt Ltd who works for SBI ATM. He is being questioned. His liability has been fixed by the bank, as he was the custodian at the time of incident. Investigation is underway,” said Mr Baaniya.