The police did not allow any student or teacher to either enter or leave the college premises. 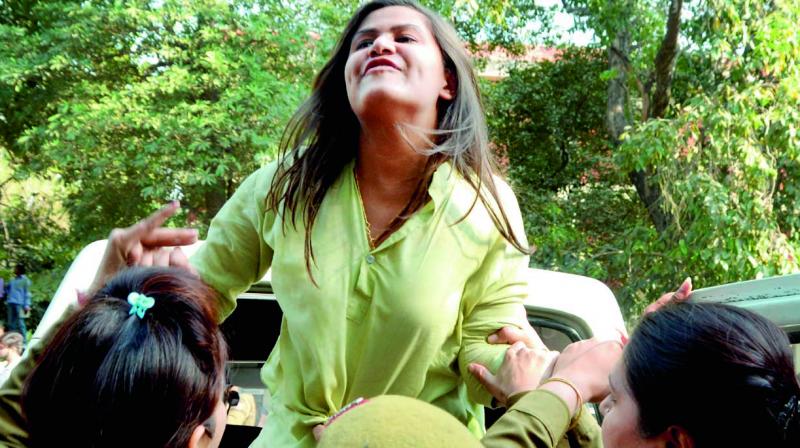 Police detains an ABVP supporter after its clash with AISA members at North Campus in New Delhi.

New Delhi: As many as 20 DU teachers and students were reportedly injured following clashes between RSS-backed ABVP and Left-affiliated AISA in Ramjas College on Wednesday over cancellation of a seminar invite to JNU students Umar Khalid and Shehla Rashid.

In the evening, the police dispersed ABVP supporters and detained over 100 protesters from outside the college premises. But all the detained students were let off by about 7 pm. Special commissioner of police Dependra Pathak said the SHO has been ord-ered to submit a detailed report on the incident and file an FIR in the case. He said three policemen were also injured in the clash.”

Even some journalists were allegedly beaten up by the police while the protestors were being detained. A senior police official said that they are looking into the matter and are trying to identify cops who assaulted mediapersons. “Once those poli-ce officials are identified, we will take strict action against them,” he said.

The clashes first took place after ABVP supporters locked DU teachers and students, who wanted to take out a protest march from the Ramjas College campus to the Maurice Nagar police station, inside the college premises. The protesters were demanding police action against ABVP supporters, who had allegedly attacked students and teachers on Tuesday.

The situation took an ugly turn when All-India Students Association members tried to rescue the protesters by opening the college gate. Soon after, protesters starting marching towards the Maurice Nagar police station. Some ABVP supporters started hurling empty bottles on them. A group of saffron youth wing supporters even physically tried to prevent the protesters from marching further. The situation could be brought under control only after the police formed a human chain to divide the two groups.

It was after about half-an-hour that the protesters started marching towards the police station. But when they were about to reach the police station, ABVP supporters prevented them from marching further. The two groups threw stones and eggs at each other, leading to injuries to at least 20 people. The injured were immediately taken to Hindu Rao Hospital. A doctor said that the injured were being treated and all were in a stable condition. He said that the injured would be discharged by Wednesday night. Outside the police station, AISA president Kawalpreet Kaur said that the student’s body would soon lodge a criminal complaint against the ABVP for indulging in violent activities. She even expressed her concern over the in-action of the police against the ABVP supporters. “It is really shameful that the police is serving as an un-uniformed arm of the ABVP. Instead of taking action against the ABVP goons disguised as students, they were just trying to cool them down and make a final settlement which ended in tcancellation of the event.”

It was on Tuesday that the RSS student wing had locked down the Ramjas college seminar room and pelted stones in protest against an invitation to JNU students to address a seminar saying they are “anti-nationals”.

The college authorities had to withdraw the invitation to Mr. Khalid, who was charged with sedition last year, and Ms. Rashid who was face of the movement demanding release of the students arrested in that case.