The Delhi police had issued notices to nine students to appear before it for a lie detector test. 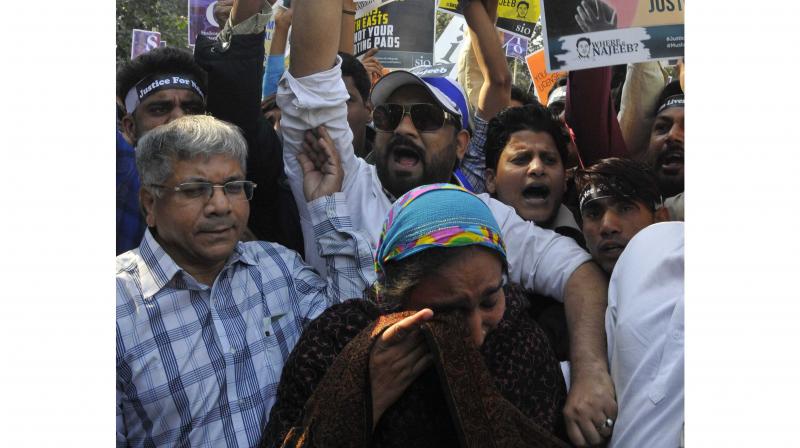 New Delhi: Hundreds of students, social activists, and student leaders under the banner of Student Islamic Organisation of India (SIO) staged a protest outside the HRD ministry on Wednesday demanding justice for the missing JNU student Najeeb Ahmed.

The protest also witnessed Najeeb’s mother, Fatima Nafees, and JNU Students’ Union president Mohit. K Pandey pressurising the government and Delhi police to find Najeeb. A delegation of the protesters also met joint secretary to the HRD ministry and submitted a memorandum to him, who promised action over the issue.

“Our universities are being turned into killing fields of deprived students. They are facing communal attacks. They killed Rohith. They enforced disappearance of Najeeb. We have to speak truth to these fascist forces. We have to keep asking #where is Najeeb,” said Mr Pandey.

Meanwhile, a Delhi court has fixed March 6 to hear the argument in connection with the missing case of the JNU student after the Delhi police failed to submit the list of the students who gave the agency their consent for a lie detector test. The police told the court that the students were busy in preparation of the exam after which the court fixed the matter for the next date.

On the next date, the police will also furnish the exam date sheet of the students. The Delhi police had issued notices to nine students to appear before it for a lie detector test.

After receiving the notices, a group of students had approached the lower court challenging the noti-ces. They filed a plea which read that neither were they named in the FIR nor was there was any prima facie evidence against them, which could prove their involvement in the case.

The students also said in the plea that there was no justification or basis to subject them to any polygraph test or any other such tests. Their plea also raised questions about the reliability of lie-detector case.

“A machine can be manipulated by artful questioning and careful preparation of the subject. Such devices are subject to manipulation by the examiner and are very subjective in terms of the results,” they had mentioned in the plea.