Swaraj India leader challenges Kejriwal to win half of seats in 272 municipal wards. 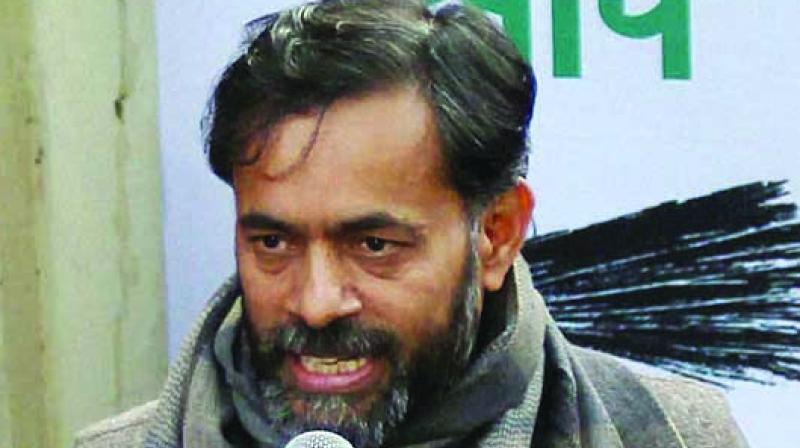 New Delhi: A day ahead of the civic elections in Delhi, Swaraj India chief Yogendra Yadav accused chief minister Arvind Kejriwal of betraying the people’s trust and challenged him to win half the seats in the 272 municipal wards.

Mr Yadav wrote an open letter to the chief minister and said he has turned the Sunday municipal polls into a referendum on his popularity.

“If he loses in this referendum, two years after securing 67 of the 70 Assembly seats in Delhi, he must not make an excuse about electronic voting machines and resign as chief minister. If you get a majority in the civic polls (137 seats or more), I will admit that my understanding was wrong and that Delhi’s people don’t consider you a betrayer. In that situation, if the Central government conspires against you, my party and I will support you,” he said.

Mr Kejriwal’s former India Against Corruption colleague said the Anna Hazare-led anti-graft campaign had given people of Delhi the “faith” that they were not “hapless”.

“They believed that they were more powerful than the leaders, the parties and governments,” said Mr Yadav, whose newly-formed party will be contesting its debut election.

He said the mandate given by Delhiites to the AAP in the 2015 Assembly elections was not because of one leader or one party. The Swaraj India leader said that during campaigning for the municipal polls, he found piles of garbage, stagnant water and stink in the air in different localities.

“The Bharatiya Janata Party is in power in the three municipal bodies for 10 years and still is seeking votes shamelessly. People who voted for the Aam Aadmi Party in 2015 for change are now going back to the BJP. After much deliberation, I have concluded that you are personally responsible for this situation,” the Swaraj India leader said in the letter.