Subjected to questions that are abusive, slanderous says FM. 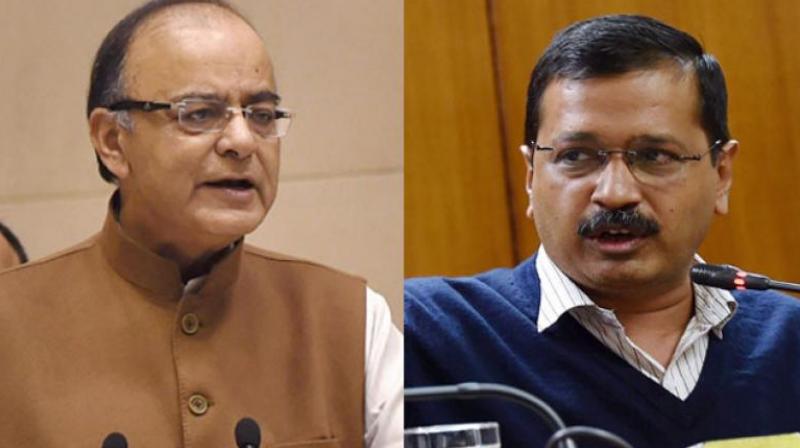 Mr Jaitley, who holds twin portfolios of finance and defence, filed the second defamation suit after Mr Kejriwal’s counsel Jethmalani allegedly “abused” him in open court during the proceedings of another defamation suit he had filed against the Aam Aadmi Party (AAP) chief and five other party functionaries.

During the cross-examination of the finance minister on May 17 before joint registrar in the Delhi high court, Mr Jethmalani had used a term Mr Jaitley had found objectionable.

A day after, Justice Manmohan, who was hearing a connected matter, had termed as “scandalous” certain remarks made by Mr Jethmalani against Mr Jaitley before the joint registrar during the cross-examination.

Terming the word as not only “false, baseless, malicious and abusive, but is per se defamatory”, Mr Jaitley in his fresh suit stated that he was “subjected to numerous questions, terminologies/ statements that are ex-facie abusive, malicious, offensive, irrelevant and slanderous”.

“Clearly, the defendant (Kejriwal) has brazenly and with a malafide intent to cause further prejudice, damage and loss to the name, reputation and credibility of plaintiff (Jaitley) has deliberately used the terminology against him,” the second law suit filed through advocate Manik Dogra said.

The suit said the Union minister enjoyed a reputation of honesty and probity and has sacrificed large professional earnings in order to undertake public service.

“These per se defamatory statements made on specific and categorical instructions of the defendant are politically motivated to cause serious damages to the reputation of the Plaintiff in an entirely irreversible manner.

“As such, the defendant has made himself liable for irreversible and uncountable damage caused to the plaintiff and is liable to compensate the plaintiff by a sum of Rs 10 crore,” the suit said.

Mr Jethmalani had told the joint registrar that he used such words against Mr Jaitley during the proceedings on instructions of Mr Kejriwal.