Titled “Pankha: Hand-Fans from the collection of artist Jatin Das”, the show features hand fans assembled over a span of 22 years. 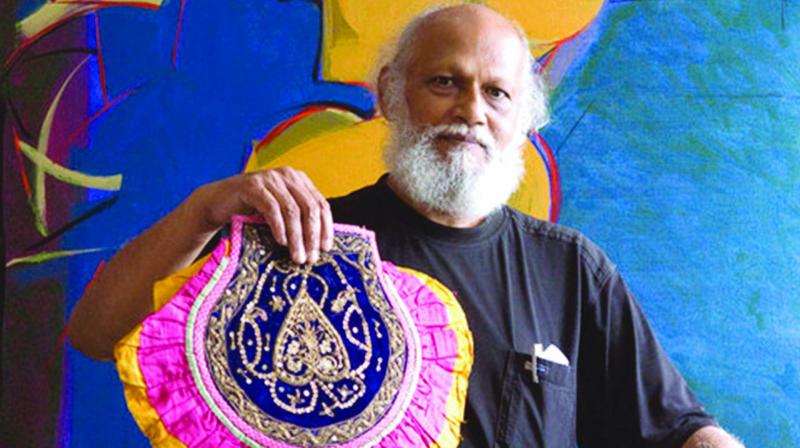 Jatin Das with a fan from his Pankha Collection

New Delhi: From being used as a common tool to fan oneself in hot summer afternoons, to being used in royal courts and temples, “Pankha”, a hand fan, over the centuries, has assumed important roles in wedding and religious ceremonies.

Over 500 fans collected by famous Indian artist Jatin Das, are part of an ongoing exhibition at the Indira Gandhi National Centre for the Arts (IGNCA) here.

Titled “Pankha: Hand-Fans from the collection of artist Jatin Das”, the show features hand fans assembled over a span of 22 years.

While some have been part of social customs in countries like Japan, China and Spain, others, procured from different parts of India, have mostly been used to combat the country’s hot summers.

The collection also features antique ceiling fans from the Mughal and Colonial period that were pulled by pankhawalas, as well as ‘phadhs’, large hand fans held by an attendant for groups of affluent men and women. The idea of collecting fans first dawned upon Das one hot afternoon 40 years ago in an attempt to “stir the still air” for a depressed friend.

“I saw a friend sitting depressed in my studio in Nizamuddin. I picked up a pankha and mockingly said, ‘let me stir the still air’. It suddenly occurred to me that this would be the perfect title for a book on the pankha, and it was this amazing hand-fan that gave me the impetus,” he said. Since then, the artist has collected around 6,000 hand fans from his travels across the world.

An artist with deep interest in traditional art, he would scout for hand fans every time he visited villages or towns in the Indian subcontinent.

The 76-year-old artist explained how the pankha found its way through almost every Indian art form, and was more than often associated with romance, rituals and royal courts.

“Almost every Indian art form features a pankha in depictions of myths, religious stories and tales of mortal adventure. Pankhas are associated with romance, as women used it to seduce, and comfort and cool their lovers with the gentle caress of softly disturbed air,” he said.

A pankha’s utility has been wide-ranging — while large fans could be found at social gatherings of aristocrats and nobles, rudimentary pankhas were used to fan cooking flames, and decorated fans were an important part of a bride’s dowry.