Pakistani Hindus battle heat and dust in their new ‘heaven’

Our children are given basic education and even a shanty has been erected where they can get tuition. 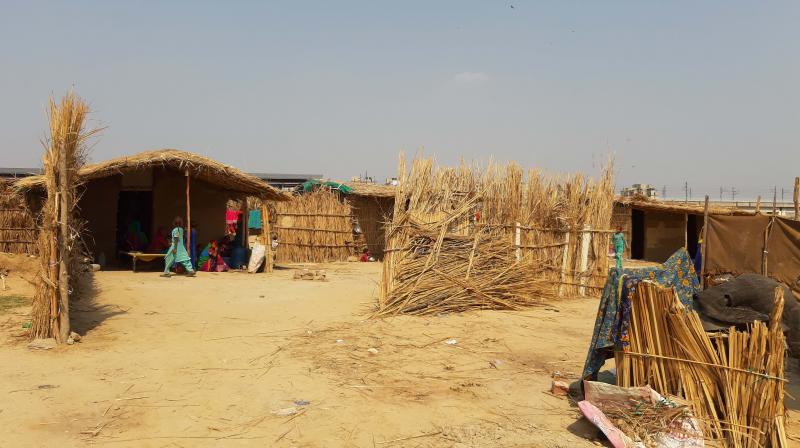 Pak Hindu migrants at a refugee camp in New Delhi

New Delhi: The Pakistani Hindu refugees, who bid adieu to their country and came to India hoping to put an end to their misery here, are living at the mercy of the weather. Recently, two persons, including a prethree persons including a six-month-old foetus died in her mother’s womb due to the scorching heat at the Pakistani Hindu refugee camp in Majlis Park area in national capital.

However, despite these extreme conditions, migrants claim it as a heaven for them as they feel safe here from abductions, rapes, and forcible conversion of their women and children.

The trauma of inhumane treatment of the minority in Pakistan has made such an adverse impact on their minds that they are least bothered about the availability of electricity considering their mental peace in India. However, life would be better if they got electricity.

Amid the stack of garbage in Adarsh Nagar lies a cluster of shacks where almost 3,000 refugees from Pakistan, who fled religious prosecution, are living under miserable conditions from the last five years. The migrants are facing a hard time as they don’t have access to electricity because of which three people including a seven-year-old boy and an unborn child died from heatwave. Even the Central and Delhi government is unable to hear their plight.

Teerath Bhagat (43) arrived in 2014 from the Pakistani city of Meerpur Khas in Sindh to escape “religious and cultural persecution and government apathy.” “Our children are not welcome at schools there. Muslims taunt us for being Hindu. They preach our children Islamic education. Even our girls are sexually harassed,” Mr Bhagat said. He said they were treated like “second-class citizens” in Pakistan.

While searching for his roots, Mr Bhagat, who was a farmer there, became emotional and said that the partition has changed their nationality without their wish. “My ancestors were from Radhanpur in Gujarat but went to Sindh in search of livelihood before partition. But in the current scenario, we (Hindus) are not given any employment there and are treated in the worst possible manner anyone could ever imagine,” he said.

“In India, we feel homely. Our children are given basic education and even a shanty has been erected where they can get tuition,” said Nehru Lal, who came from Hyderabad in Sindh in 2013. Majority of the people work as labourers in the nearby areas while some sell mobile covers and temper glasses at GTB, Azadpur, and Jahangir Puri Metro stations as they don’t get employment opportunities without Aadhar card.

Ambo, who came from Tando Allahyar area in Sindh, said: “We just want to work and earn our living, but don’t want to get it from illegal means. We can’t betray India, who gave us the right to live with dignity.”

The Hindu migrants come after getting valid religious visa for visiting Mathura and Haridwar. Later, they approach the Delhi Police Bhawan (special branch) to get their visa extended.