The busts were installed by the ABVP-led DUSU at the varsity’s arts faculty earlier this week. 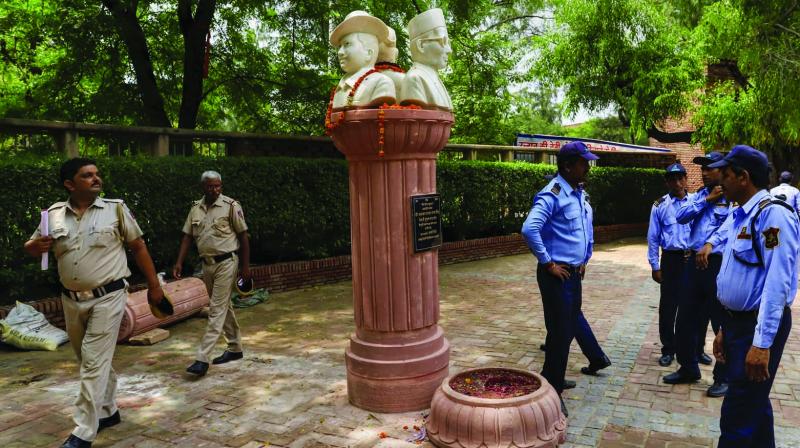 New Delhi: A fresh controversy was triggered in the Delhi University where the Congress-affiliated NSUI leaders on Wednesday night blackened the bust of Veer Savarkar in DU north campus and even garlanded it with shoe while bowing in front of the busts of Bhagat Singh and Netaji Subhash Chandra Bose.

The busts were installed by the ABVP-led DUSU at the varsity’s arts faculty earlier this week.

The National Students’ Union of India and the Left-backed All India Students’ Association had criticised the move, saying Savarkar cannot be kept on the same pedestal as that of Bose and Singh.

In a video of the incident, NSUI Delhi wing president Akshay Lakra can be seen garlanding the busts of Bose and Singh and bowing down to them. He then removes the garlands around Savarkar’s bust and puts a garland of shoes around it even as he is stopped by security personnel.

The garland of shoes is removed by them but Lakra blackens the bust and then shouts slogans of “Bhagat Singh zindabad”, “NSUI zindabad”.   “How could they have put the bust of Savarkar alongside Bose and Bhagat Singh, that too overnight. We had to take the matter into our hands. The university administration has been silent about the issue. The varsity is working at the behest of ABVP,” Lakra alleged.

The RSS-affiliated ABVP termed it a “heinous act”. “Last night, the humiliation by the NSUI to the statue of Veer Savarkar at Delhi University is a heinous act and such an act for trivial political interests reflects the Congress’ thinking towards the great freedom fighter of India,” said Monika Chaudhary, national media convenor, ABVP.

The ABVP will make students aware about this “negative mindset” of the NSUI and its parent organisation, she said. “In the context of this deplorable act, the ABVP urges the administration to take stern action against those involved in insulting the statue of the freedom fighter,” Ms Chaudhary said.

Sources said DU proctor Neeta Sehgal issued a showcause notice to former DUSU president Shakti Singh on Wednesday demanding an answer within 24 hours on why the bust was installed without permission from the authorities.

Sources close to Singh said that he hasn’t received a notice till now. Shakti Singh’s tenure as DUSU president ended on August 21. The Delhi University Students’ Union polls will be held on September 12. On Wednesday, the ABVP had said it has instructed its office-bearers in the DUSU to shift the busts to the office till the time the university administration grants permission.