Manish Sisodia, other AAP leaders held for leading a protest against demonetisation

Mr Sisodia led hundreds of slogan-shouting AAP activists on a march from near the Jantar Mantar monument towards the Parliament. 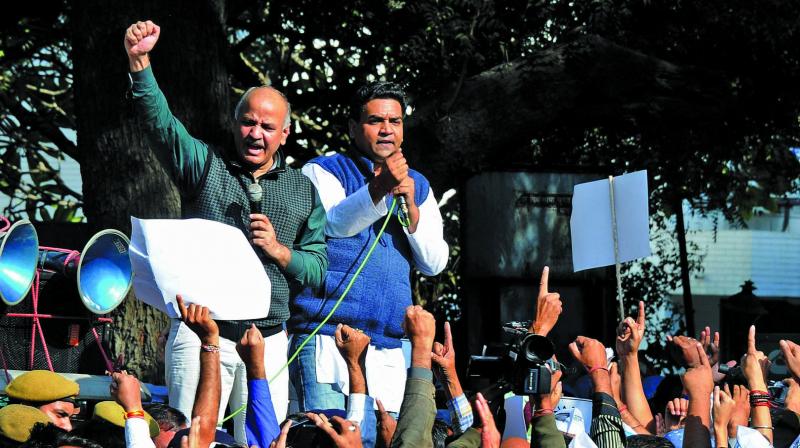 New Delhi: Over 50 Aam Aadmi Party (AAP) leaders, including deputy chief minister Manish Sisodia, were detained after leading a protest against demonetisation on Tuesday. The leaders were later freed by the police. Denouncing the Centre’s move to demonetise Rs 500 and Rs 1,000 notes, Mr Sisodia led hundreds of slogan-shouting AAP activists on a march from near the Jantar Mantar monument towards the Parliament.

“The demonetisation has destroyed people’s lives while it has had no effect on black money,” Mr Sisodia addressed the gathering that also included Delhi ministers Gopal Rai, Kapil Mishra and Satyendar Jain.

Several AAP members of the Delhi Assembly also joined the noisy protest, carrying placards and demanding the reversal of the November 8 demonetisation policy of the high value currency that has triggered cash chaos. As they reached the police barricades outside the Parliament Street police station, barely one kilometre ahead of the Parliament, Mr Sisodia gave another speech hurling corruption allegations against Prime Minister Narendra Modi. He said that demonetisation had caused misery and deaths to the common man.

The AAP has come out strongly against demonetisation, saying the currency spike was a scam aimed at bailing out corporate houses that had borrowed heavily from banks.
Meanwhile, the AAP volunteers detained at the Parliament Street police station on Tuesday found to their luck a functional ATM with no queue.

In no time, everyone hurriedly withdrew cash. The ATM is normally used only by police personnel. “I am making good use of my time. At other places one has to queue up for a long time,” said Jagar Khan, a party volunteer from Mustafabad.