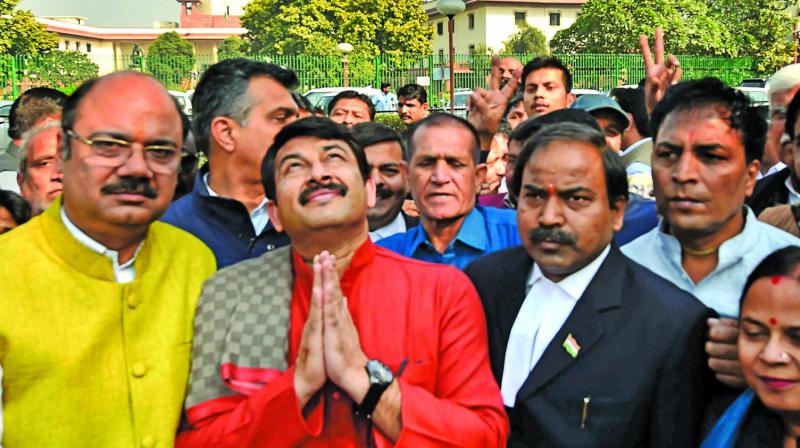 Delhi BJP president Manoj Tiwari reacts while talking to the media at the Supreme Court after he was acquitted in a sealing case on Thursday. (Photo: PTI)

New Delhi: Delhi BJP chief Manoj Tiwari on Thursday said that the Supreme Court, which closed contempt proceedings against him, had noted his concerns over the pick and choose policy in the ongoing sealing drive in the national capital.

Earlier on Thursday, the apex court dropped the contempt case against the Northeast Delhi MP, but deprecated his action of breaking a civic agency seal at a premise in his constituency’s Gokalpur area.

In a statement, Mr Tiwari said, “The pick and choose policy of the monitoring committee and the illegal sealing actions, which have been highlighted by us, have been taken note of by the Supreme Court.” The court observed that as an elected representative, Mr Tiwari should have exercised restraint and pacified the mob rather than taking the law in his own hands.

A bench headed by Justice Madan B. Lokur said the court was “extremely pained” by Mr Tiwari’s behaviour.

The BJP leader had already stated in his affidavit that the situation at the spot required an “affirmative action” and he broke the seal as a “symbol” of protest, the statement said. “The need of the hour was such where a symbolic seal breaking action had to be done in view to protect and maintain the law and order situation on ground at that particular moment,” it said.

Mr Tiwari, accompanied by his supporters, had broken the seal in September put by the veterinary department of the East Municipal Corporation of Delhi (EMCD).

An FIR was registered against him and a Supreme Court mandated monitoring committee referred the matter for contempt proceedings against him.

The committee is supervising the ongoing sealing drive against violations of Delhi’s Master Plan, undertaken by the municipal corporations since last year.