AAP does a U-turn on Rajiv row, Congress slams party 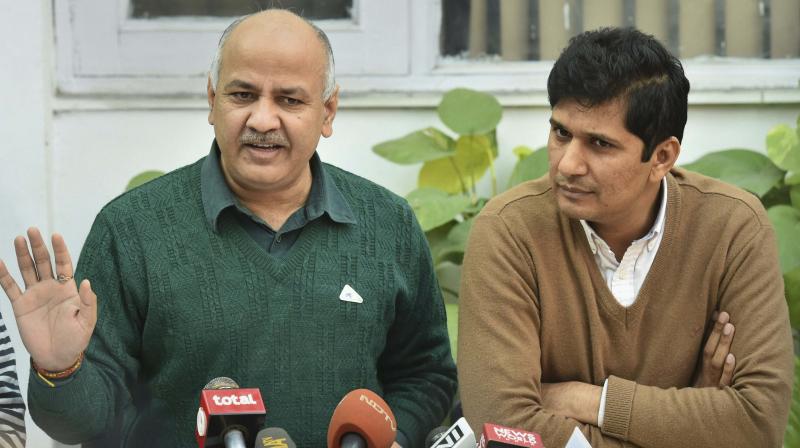 New Delhi: The Aam Aadmi Party (AAP) on Saturday was busy dousing the controversy over a reference to Rajiv Gandhi made during the adoption of a Delhi Assembly resolution on the 1984 anti-Sikh riots, as Speaker Ram Niwas Goel asserted that the demand for revocation of the Congress leader’s Bharat Ratna was not part of the resolution passed by the House.

Senior AAP leader and deputy chief minister Manish Sisodia said that no resolution mentioning the late PM had been passed.

He also rejected party MLA Alka Lamba’s claim that chief minister Arvind Kejriwal had sought her resignation for not supporting the resolution in the Assembly on revoking Rajiv Gandhi’s Bharat Ratna.

Ms Lamba told a news agency, “I am not resigning. I am extremely happy that the party has supported the awarding of Bharat Ratna to late Rajiv Gandhi ji. The country can never forget the sacrifice made by him. I am removing the copy of the resolution not passed by the House,” she tweeted on Saturday.

On Friday, the Delhi Assembly had adopted the resolution on the 1984 anti-Sikh riots but AAP swiftly distanced itself from any reference to Rajiv Gandhi after it evoked a sharp response from the Congress.

Amid the controversy, Mr Goel said on Saturday that MLA Jarnail Singh’s “proposed amendment” for taking back the “Bharat Ratna” from Rajiv Gandhi over the 1984 anti-Sikh riots in the “original resolution” was not adopted as he did not inform the House before doing so.

“It was an emotional issue and Jarnail Singh mentioned the name of Rajiv Gandhi during his speech on the resolution,” Mr Goel told a news agency.

Speaking in the same vein, Mr Sisodia said that the lines about the former Prime Minister were not part of the original resolution placed before the House and it was a handwritten amendment proposed by a member.

The issue snowballed with Ms Lamba saying she will tender her resignation over revoking the late PM’s award. She also staged a walkout.

AAP spokesperson Saurabh Bharadwaj, who narrated the entire sequence of events in the Assembly, clarified that any amendment to a resolution can become a part of the original only after it has been separately voted on by the House, which did not happen in this case.

Mr Singh had said that it was only a technical shortcoming.

He said though the reference to the late PM in the resolution was not there in the written copies, it was made orally and passed by the House by voice vote.

The Opposition BJP and Congress fired salvos at the party on Saturday saying it was resorting to “drama politics.”

Sharing a video of Friday’s Assembly proceedings, Mr Maken claimed “the resolution was passed by the AAP in Delhi Assembly.”