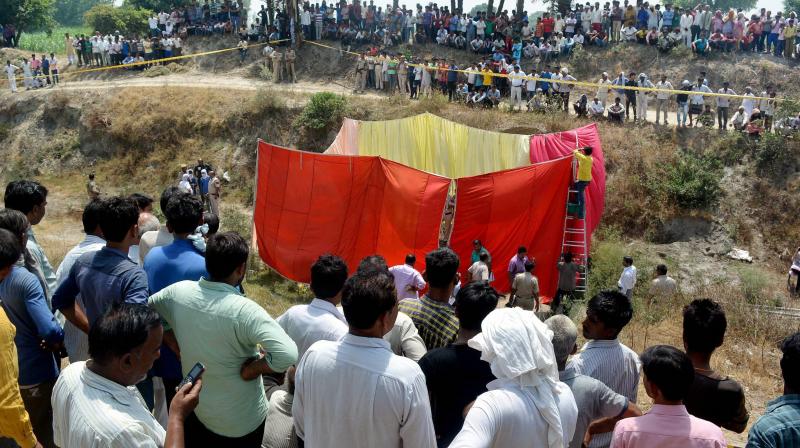 People gather as Police investigate the spot and collect evidences at Daurala where three members of Bahujan Samaj Party leader Munawwar Hasan were murdered and buried, in Meerut. (Photo: PTI)

New Delhi: As the police on Tuesday recovered the highly decomposed bodies of property dealer Munawwar Hassan’s wife and two daughters from Daurala village in Meerut, who were allegedly killed at the behest of his business partner, more details of the horrific crime that has shaken conscience of Delhiites are tumbling out.

“Please kill me also,” pleaded Arzoo Hassan to Bunty and contract killers, who killed her mother and younger sister in front of her eyes.

All of three women were shot dead from point blank range and their bodies were buried on an isolated river bed in outskirts of Meerut town in UP. This disclosure has been made by none other than Sahib Khan, alias Bunty, a former aide of Arzoo’s father and BSP leader Munawwar Hassan, who had eliminated Hasan’s family of six, said the police.

Minutes before this Arzoo, her mother Sonia and sister Arshi did not have the faintest of clues that life will take this sudden and final turn. In his chilling account of how he committed the murders, Bunty has provided a blow by blow account.

“They were returning to Delhi from Saharanpur where he had taken the mother-daughters trio to their relative’s house. They were all in Bunty’s car when three men boarded the car at Daurala village in Meerut. These three were the local contract killers Bunty had hired to eliminate,” said a police officer.

“They then drove away towards a forested area close to the highway and reached the bed of the dried up water body, colloquially known as Kali Nadi in Ikhtiyarpur area, fuelling more suspicion. There they asked Sonia and her daughters to come out of the car,” said the officer. When they came out, Zulfikaar allegedly took a country made firearm and shot a round into Arshi’s head.

“Bunty disclosed that it all happened in a Jiffy and a perplexed Sonia asked him why was her daughter killed. In response, he simply smiled,” said the officer recounting the chilling disclosure.

When she saw her mother and sister falling one by one, Arzoo saw the writing on the wall. She demanded death. They were carrying shovel and other equipment and immediately dug up the river bed hiding the bodies and leaving the seen.

Bunty also disclosed that he had conducted a reconnaissance of the area to identify a suitable spot before committing the murders. His phone location has confirmed his earlier visit. After his return to Delhi, Bunty even called the Saharanpur relatives of Sonia telling them that she and her daughters had gone missing after their return to the city and asked them if they had been contacted by the three.

Next day, he also allegedly killed the realtor’s sons Sakib and Akib. When Sakib and Akib reached Bunty’s office to find out the whereabouts of their family members, Bunty also eliminated them.

“Bunty and his men took them to the first floor of their office building, tied their limbs and gagged their mouths. In the meantime, they dug up the ground floor of the house. The boys remained in that state for nearly 24 to 30 hours before being strangulated to death and buried in the pit they had dug up,” said the officer. After this they put 10 kg salt and 15 bottles of perfume to suppress the foul smell before layering it with soil and concrete.