No other BJP candidate was able to cross the victory margin of two lakh votes in the previous Parliamentary polls. 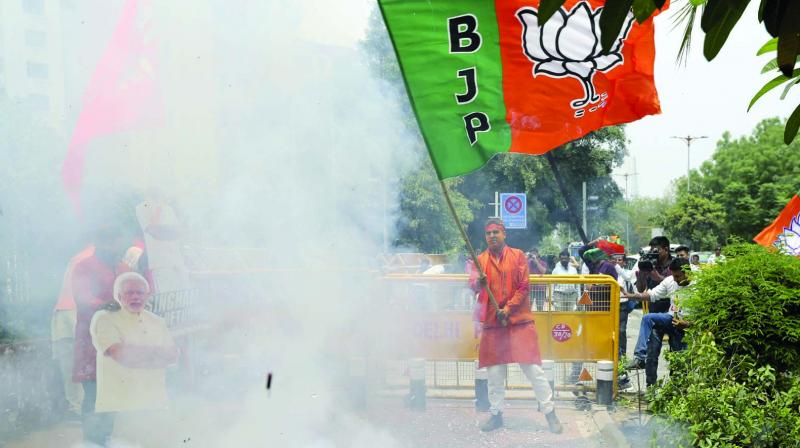 New Delhi: The BJP on Thursday retained all the seven seats in the 17th Lok Sabha elections in the national capital with two of its candidates winning by over 5.50 lakh margin while the Congress and AAP trailed at the second spot in five and two constituencies respectively. Except for Northwest Delhi and South Delhi constituencies, the AAP was decimated to the third position in the remaining five seats.

As the election trends started pouring in favour of the BJP, which got a vote share of 56 per cent, celebrations started at saffron party’s various counting centres where jubilant supporters of the party started bursting crackers and shouting slogans. The supporters chanting “Jai Sri Ram” slogans were seen at the party’s national headquarters at DDU Marg and outside its state unit office at Pt. Pant Marg.

The election results clearly showed that if the Congress and the AAP had joined hands together before the voting, even then they could not have stopped the BJP tsunami which swept all the seven seats. Prior to the polls, AAP supremo and chief minister Arvind Kejriwal and former union minister and Congress candidate from New Delhi constituency Ajay Maken had said that if the two parties did not forge an alliance, it would automatically work in favour of the BJP.

In the crucial North East Delhi seat, Delhi BJP chief and sitting MP Manoj Tiwari, who is also a popular Bojpuri singer, defeated his nearest rival Congress state unit president and three-time chief minister Sheila Dikshit by a margin of over 3.66 lakh votes. The AAP’s Dilip Pandey was reduced to the third slot.

Mr Tiwari said they (BJP) were sure of victory but did not expect such a “huge” margin. “We were confident of the victory but were not expecting this kind of huge margin. I am indebted to the voters for imposing their faith in us. We have crossed the first hurdle in Delhi and will now gear up for the second one in February (Assembly elections).”

BJP’s incumbent MP from West Delhi Parvesh Verma won with a highest margin of about 5,78,486 votes while Congress’s Mahabal Mishra remained at the second spot. Mr Verma had won from the constituency in 2014 with a record margin of over 2.68 lakh votes, the highest in the national capital ever. No other BJP candidate was able to cross the victory margin of two lakh votes in the previous Parliamentary polls.

Mr Verma was followed by singer-turned-politician Hans Raj Hans who won with a margin of about  5.53 lakh votes in the Northwest Delhi constituency where he was pitted against AAP’s Gugan Singh, who is on the second position and Congress’ Rajesh Lilothia at the third spot. Mr Hans was brought in by the BJP at the last moment by replacing sitting MP Udit Raj.

Chandni Chowk and New Delhi were the only seats where the winning margin of the BJP candidates was less than three lakh. In Chandni Chowk, Union minister Dr Harsh Vardhan was locked in a close fight with Congress veteran Jai Prakash Agarwal. Dr Vardhan won the seat by a margin of about 2.26 lakh. In New Delhi seat, incumbent MP Meenakshi Lekhi won against Ajay Maken by 2,56,504 votes.

Mr Gambhir tweeted: “Neither it’s ‘Lovely’ cover drive, nor it is an ‘Aatishi ballebazi (batting)’, it is just the BJP’s ‘Gambhir’ (serious) ideology which people have supported.” Mr Gambhir was brought in the fray by the saffron party by replacing sitting MP Mahesh Giri.