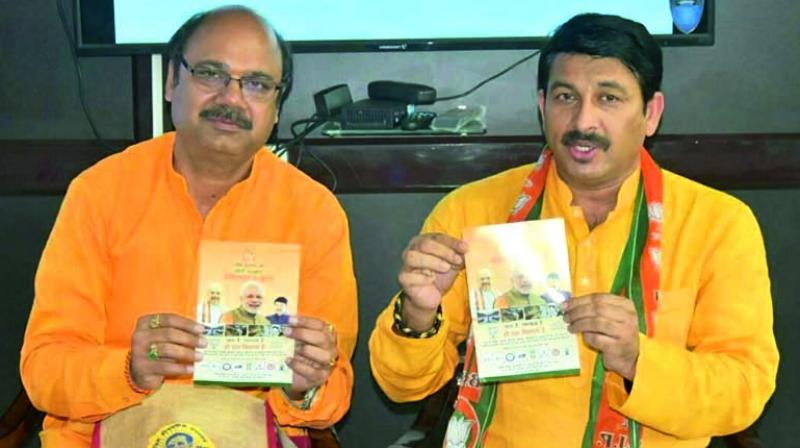 New Delhi: In a major embarrassment for the BJP, the party’s Delhi unit on Friday, forgot to observe martyr’s day of its ideologue, Dr Syama Prasad Mookerjee.

It was only after some party workers raised questions over the matter that Delhi BJP president Manoj Tiwari swung into action and directed his office bearers to
organise the function on a short notice at Shahidi Park in ITO where the party ideologue’s statue is installed.

“Today, no one in the party has any information about whether any programme is scheduled or not on the ‘balidaan diwas’ (martyr’s day) of Dr Mookerjee. The
programme organised on a short notice was an act to cover up the blunder made by the state unit. The responsibility of organising such programmes lies with

four general secretaries including general secretary (organisation). But the alertness of Mr Tiwari has saved the state unit from a major embarrassment,” he said. Sources said that till Friday morning, no one in the party was aware of any programme at the ITO.

It was Mr Tiwari who asked some of the party leaders to organise a function to pay tribute to Dr Mookerjee. Even a media invite for the 11 am programme was sent to beat reporters at around 10.20 am. Around 50 odd workers were present, but none of the state office bearers were seen at the venue.

After paying floral tribute to Dr Mookerjee, Mr Tiwari said that the former had made great contributions during the country’s freedom movement as a minister in the first national government and thereafter with his work for Kashmir’s integration in India. “He gave his life fighting for the cause of Kashmir being an integral part of India,” Mr Tiwari said.

The BJP central leadership has directed the state unit to organise six programmes, which includes observing the martyr day of Dr Mookerjee on June 23 along with the birth and death anniversary of party ideologue Deen Dayal Upadhyay; a bi-monthly programme at the booths; celebration of party’s foundation day on April 6; and two programmes as decided by the state unit.