BJP chief accuses Congress and AAP of caring for illegal infiltrators due to focus on vote bank politics. 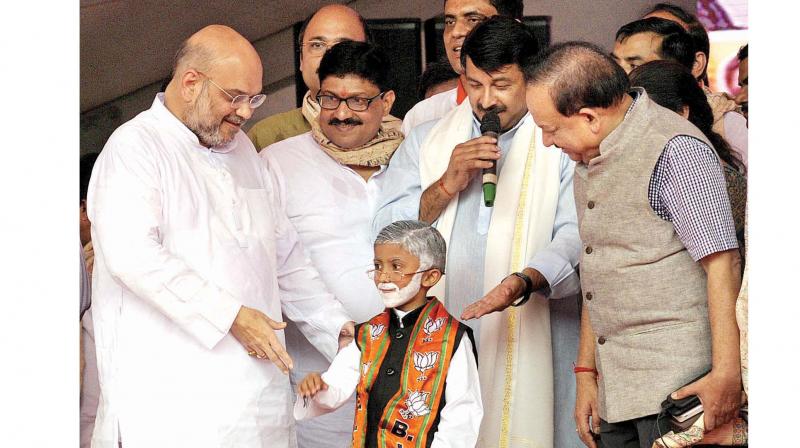 BJP president Amit Shah, along with party’s Delhi unit chief Manoj Tiwari and other leaders, enjoys a moment with a boy dressed as Prime Minister Narendra Modi during the Purvanchal Mahakumbh at Ramlila Maidan in New Delhi on Sunday. (Photo: Pritam Bandyopadhyay)

New Delhi: BJP chief Amit Shah said on Sunday that his party will seek to identify illegal immigrants living in the country if it comes to power after the Lok Sabha polls. He alleged that Congress president Rahul Gandhi and Delhi chief minister Arvind Kejriwal care for them for the sake of vote bank politics.

Addressing a rally at Ramlila Maidan to woo the Poorvanchal voters, he said illegal infiltrators were causing trouble in the national capital and action against them should not worry any patriot. He claimed that Opposition’s grand alliance stood no chance against Prime Minister Narendra Modi’s NDA in the next general elections.

Terming illegal infiltrators as termites, he said that BJP will undertake identification of such people across the country after winning the elections in 2019.

“The illegal infiltrators are acting like termites in this country. They are also causing problems in Delhi. Action against them should not worry any patriot. But whenever we take action Rahul Baba and Kejriwal start complaining. They care for illegal infiltrators because of vote bank politics,” Mr Shah said at the Poorvanchal Mahakumbh organised by the Delhi unit of the party at the Ramlila Maidan.

The BJP chief challenged Mr Gandhi and Mr Kejriwal to clear the stand of their respective parties on the issue of illegal immigrants living in the country. Sharpening his attack on Mr Kejriwal, Mr Shah charged the AAP leader of “preventing” development of Delhi in his 3.5 year rule.

Attacking the efforts of the opposition parties to forge a Mahagath-banhan against the ruling National Democratic Alliance (NDA) led by BJP, Mr Shah said that his party was ready to take the challenge.

“This Mahagathbandhan has no policy or leader. Rahul wants to lead the bandwagon but leaders like Sharad Pawar, Mamata Banerjee, Mayawati, and Akhilesh Yadav are against it,” he said.

Lauding Poorvanchalis for their contribution in the development of the country in the past 4.5 years of Modi government, the BJP chief said his party will not rest till the eastern part of the country was as developed as the western part.

Accusing Congress of doing “injustice” to the eastern region — including part of UP, Bihar, Odisha, and Jharkhand — Mr Shah said that Modi government released 13.80 lakh crore in the past 4.5 years and ensured development through expressways, hospitals, and industries in the area. The Poorvanchal Mahagathbandhan is the first in a series of four mega rallies planned by BJP in Delhi in the run up to the Lok Sabha elections, said Delhi BJP chief Manoj Tiwari.