Refuse to submit videos, photos fearing cops may frame them for rioting. 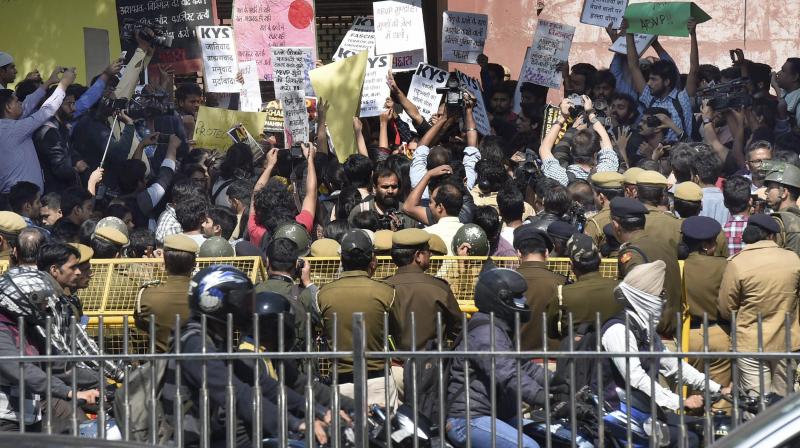 Policemen guard as All India Students Association (AISA) and Jawaharlal Nehru University students hold a protest demanding the arrest of Akhil Bharatiya Vidyarthi Parishad (ABVP) members at the police headquarters in New Delhi on Thursday. ABVP members on Wednesday clashed with AISA at the North Campus of DU. (Photo: PTI)

New Delhi: Delhi University (DU) students have denied submitting photo, videos, and other electronic evidences of the students’ clash in DU’s North Campus to the Delhi police on Friday.

On Thursday, the AISA from DU and JNU had staged protest at the police headquarters. The case was transferred to the crime branch for probe.

The crime branch will examine the videos that have surfaced and it has also issued an email id for students to submit photos, videos, and other complaints regarding the clash on Wednesday.

The students suspect that after getting the evidences, the Delhi police could frame them under charges of rioting by confirming their presence with evidences submitted by them.

A meeting was called in North Campus on Friday to discuss the future course of action in the Ramjas College incident. The meeting was attended by teachers, students, and members of the student union. During the meeting it was decided that the FIR registered by the Delhi police includes IPC Section 147 (punishment for rioting) and 149 (every member of unlawful assembly guilty of offence committed in prosecution of common object). All of the complaints and evidences will be submitted in the court as the students want fair investigation in the case.

“The students, who are submitting the evidences, could be framed by the Delhi police as it confirms their presence on the spot and they could be framed under charges of unlawful assembly and rioting,” said a lawyer, who was also a part of the meeting.

He added that they want the Delhi police to register the case under IPC Section 116 (abetment of offence punishable with imprisonment) as ABVP members attacked the students protesting peacefully in North Campus. “The ABVP members should be charged with abetment as they have attacked the students. We will submit all the evidences in the court. It has been decided after going through all the legal aspects and the FIR filed by the police,” the lawyer added.

Meanwhile, the Delhi police gathered CCTV footage of the area where the incident happened for further investigation. On Friday, despite the colleges being closed on account of Mahashivratri, heavy police deployment was seen in and around North Campus.