The DDA has demolished the wall dividing the park from the forest land. 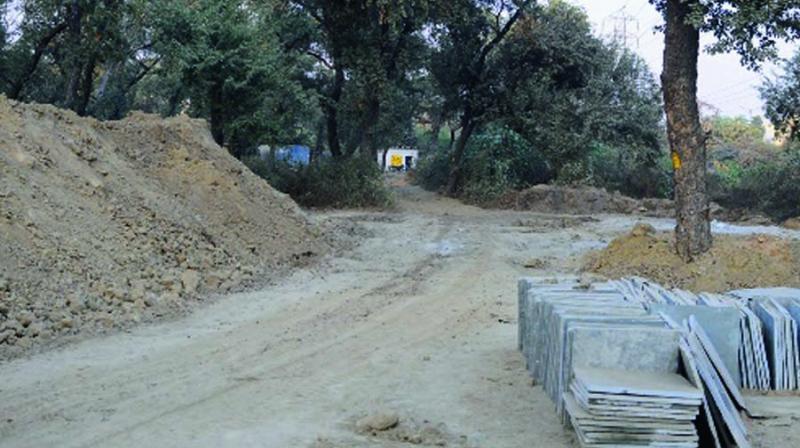 According to the local residents, the construction activity for an underground water plant has been going on for the last one and a half years in the protected forest area without necessary permissions.

New Delhi: Construction activity by DDA (Delhi Development Authority) in a protected forest area in West Delhi’s Mayapuri green belt has resulted in the loss of forest cover, damaged some trees, and reduced the number of bird species there.

According to the local residents, the construction activity for an underground water plant has been going on for the last one and a half years in the five-acre protected forest area without necessary permissions.

For this, all the foliage has been cleared from the forest and from the park converting them to a barren ground.

An RTI was filed by environment activist Vikrant Tongad last year but the response received did not state the permissions taken and said that the construction work is for the forest area itself.

“What kind of stupid reply is that? The construction is most likely to benefit showrooms and banquet halls coming up on Mayapuri Road. This has happened when we are all battling with pollution in Delhi,” said Jitender Dhir, a local resident.

The area also constitutes a park. The DDA has demolished the wall dividing the park from the forest land.

“The intention behind this is to merge the park area with the forest area and to make them both a barren muddy ground as opposed to a natural ecologically stable green area with rich biodiversity,” he said.

The park and forest area serve an important place for resident and migratory birds with many using it as a halting ground during migration. Some rare birds spotted there include serpent eagle, honey buzzard, barn owl, long tailed minivet, grey headed flycatcher, paradise flycatcher, and thick billed flower pecker.

Mr Dhir, who had earlier recorded 45 species of birds in the forest and park area, said that the number has reduced since the construction activity began.

“From November 2015 to December 2016, I have written various letters to DDA and approached the forest department but no appropriate action has been taken,” said Mr Dhir.

In fact the DDA in its RTI response accepted that in reference to the complaint by Mr Dhir, a restraint order was issued in December 2016 to stop the construction work.

However, Mr Dhir said that the incomplete structure is still in the forest area and even the construction material is lying idle at the site.