2 others injured as fire causes LPG cylinder to explode. 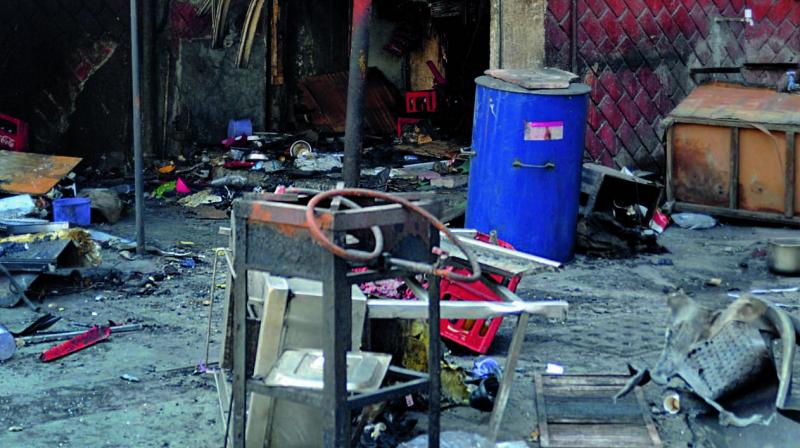 The eatery which caught fire in the early hours of Friday. (Photo: Asian age)

New Delhi: Two firemen died in the line of duty and two other firemen were severely injured after an LPG cylinder exploded when they were fighting a blaze at a shop in West Delhi’s Vikaspuri area early Friday morning. The Delhi government might announce compensation to the tune of Rs 1 crore to the two firefighters who died in the incident.

In the preliminary investigation, it appears that the fire in the eatery started due to a shock circuit. By the time a team of firefighters rushed to the spot, one of the four LPG cylinders exploded. The cylinder was behind the shutter and by the time the firefighters tried to open it, the cylinder exploded.

According to the Delhi Fire Services, firefighters Hari Om Gahlot and Hari Singh Meena succumbed to injuries while the other two firefighters — Naveen and Ravinder — are undergoing treatment at a private hospital.

The owner of the eatery, Chatkora Food n Snacks, was arrested by the police. A senior police official said that the owner, Satpal Singh, claimed that out of the four LPG cylinders, two were commercial and the other two were domestic. One of the domestic cylinder exploded. The police arrested Singh under Section 304 A of the IPC at the Vikaspuri police station after which he was released on bail.

“We got a PCR call at 5.44 am about fire in shop. Delhi Fire Services were alerted and soon they reached the spot,” said a senior police official.

According to the fire department officials, 3 fire tenders, along with 10 firemen, were rushed to the spot to douse the blaze. Two-and-a-half hours later, the firefighters managed to control the blaze. And in the process of opening the shutter of the shop, a cylinder exploded and the four officials were injured.

Delhi home minister Satyendar Jain, who met the injured firefighters at hospital, termed the incident as “unfortunate” and said that prima facie, there were no procedural lapses noticed on the part of firemen in tackling the incident.

“We will find out if the restaurant was running illegally and if the owner had compromised with safety and security measures,” said the officer.

By 7:36am, the fire was completely doused. Apart from the team of Delhi Fire Service and the local police, a team from the Forensic Science Laboratory too visited the spot to carry investigations.

Police sent the bodies of the two deceased firefighters to the mortuary of the Deen Dayal Upadhyay hospital for post mortem. Following which the families of the victims took the bodies for last rites.

As per the Delhi Government’s policy, compensation to the tune of Rs 1 crore is given to kin of uniformed services personnel killed on active duty. “All aspects related to the incident will be examined and thereafter, a decision on compensation will be taken,” an official said.